This is an exceptional example of a rare Burgess "Folding Gun" slide action shotgun manufactured by the Burgess Gun Co. of Buffalo, New York, circa 1892 to 1899. It is unknown what the total number manufactured was, but it is estimated to be only a few thousand were made. This shotgun has the unique design invented by American inventor Andrew Burgess who established himself in business in 1892 to manufacture this unusual repeating shotgun which has an iron sleeve over the stock wrist that activates the bolt and breech mechanism when slid backwards. Burgess was also noted for his lever action rifles made by Colt and Whitney. This particular "Folding Gun" has a 19 1/2 inch barrel and is hinged on the underside of the receiver with a lift lever on top which releases the barrel so that it can be folded in half. A unique "quick draw" waist holster was made to go with it and the contemporary holster accompanies the shotgun. The shotgun was advertised as being especially adapted for police service, express messengers, U.S. Marshals, prison and bank guards. Most notably, a similar example was recovered at the scene of Pat Garrett's Murder. (He was known for killing Billy the Kid).The underside of the receiver is marked with the three-line patent and reissue dates. The top is marked "BURGESS GUN COMPANY" flanked by light scroll on the right side and "-> BUFFALO, N.Y. U.S.A.<-" on the left side, and the matching serial number is stamped on the front left edge of the receiver, on the underside of the receiver, and on two in two places on the rear of the barrel assembly. Blade front sight and there is a dished out area in the top of the barrel release lever that serves as the rear sight. All blue finish and mounted with a multi-point checkered walnut forearm and pistol grip stock with a checkered hard rubber Burgess Gun Co. Dog's head logo buttplate. The choke gauges at modified and the length of pull is 13 5/8 inches.

Extremely fine. The shotgun retains 85% plus bright original high polish blue finish showing some edge wear and some areas thinned to a smooth plum patina. The wood is also very fine retaining almost all of the original varnish and showing some scattered minor dings and scuffs. The checkering remains crisp. The markings are crisp and clear. Mechanically excellent. The holster is excellent with a few light scratches. This is an exceptional example of a rare Burgess slide action "Folding Gun" shotgun with waist holster. 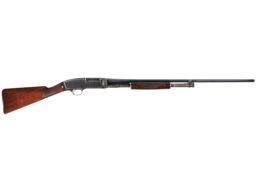 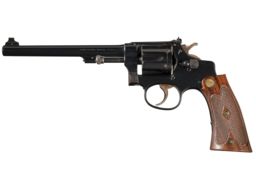 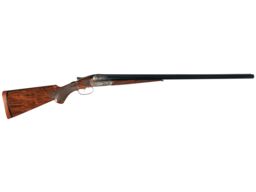 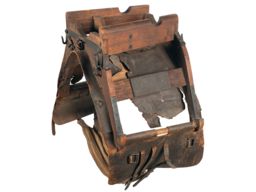 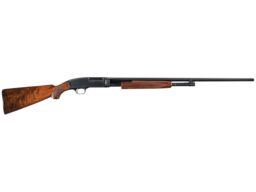 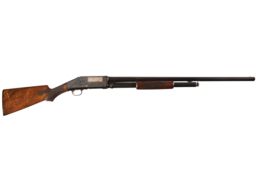