The included Smith & Wesson factory letter confirms that this revolver, serial number 68303, was "offered by Smith & Wesson for sale at the 1893 Columbian Exposition in Chicago, but did not sell and was sold after the close of the World's Fair." Although held in 1893, the Chicago World's Fair celebrated the 400th anniversary of Christopher Columbus's landing in America (1492) and became a symbol of American exceptionalism that was sweeping the nation. Larger and grander than other world's fairs of the past, the six month running fair was attended by more than 27 million people and showed the world that Chicago had risen from the ashes of the Great Chicago Fire of 1871. At the fair Smith & Wesson exhibited spectacular decorated handguns, including those manufactured in conjunction with Tiffany & Co. The exhibition engraving on the revolver is indicative of the rich quality and style of scrollwork offered by Smith & Wesson. The engraving is done in the hand of one of the Young family members, arguably the greatest family dynasty in the 19th century American engraving: Gustave, Oscar or Eugene. The factory letter also confirms the 4 inch barrel, factory engraving, nickel and gold finish and pearl grips and that the revolver was shipped from the S&W factory on January 15, 1894 to Hartley & Graham Co., New York City. The top of the barrel rib has the two line address/patent marking. The scroll and dot exposition engraving is featured on the barrel sides, frame sides, top strap, top rear of the frame and back strap to extend to the butt surrounding the serial number. It features a half moon front sight, notch rear sight ahead of the latch, checkered back strap grip safety and 5-round auto ejecting cylinder. Nickel with gold finished cylinder, blue trigger guard and casehardened trigger and fitted with pearl grips.

Very fine. The revolver retains 90% plus original nickel finish and 30% original gold finish with a smooth gray patina on the balance. Some pin point pitting is present on the cylinder. The trigger guard retains traces of original blue finish and the trigger has faded to a gray. The grips are very fine with a few minor pressure dents and some minor scratches. The pearl has a very attractive color. Mechanically fine. 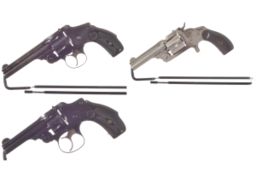 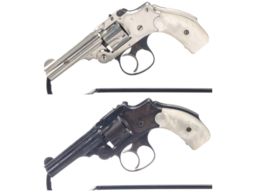 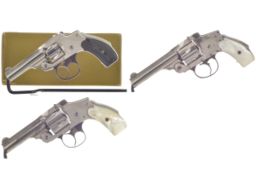 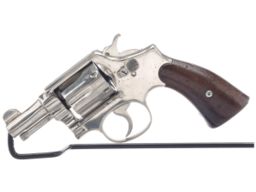 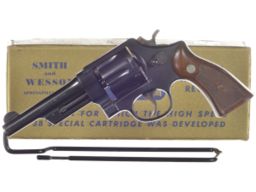 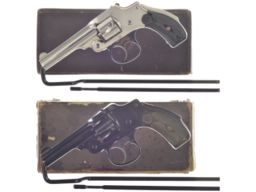