Listed by Held as "virtually 'mint'." We feel they are fine as contemporary built within the last century. The brass barrel, primer reservoir, ramrod pipes, and trigger guard display deep aged patina and retain crisp engraving and markings. The lock and track have dark gray/brown patina and distinct markings. The stock has some rub wear and a chip above where the tail of the lock rests in the rearmost position, minor pressure marks and scratches, a minor crack at the front of the long lock/track mortise, and crisp carving at the breech. Mechanically fine. The model is in similar condition, has a couple loose pieces, and minor age, storage, and handling related wear. It is non-functional. As Robert Held wrote, "The pistol represents without question the summit of American gunmaking skill before the eighteen-thirties, and it bears engraved on its barrel the earliest known dated depiction of the 'Betsy Ross' flag. . . Finally, the custom wooden model is a unique model of American arms development history, or for that matter British or any other so far as enquiries in two patent officers, three historical arsenal-museums and in arms-study circles generally have been able to discover." 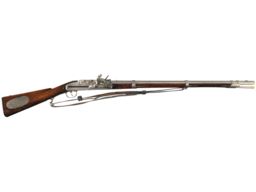 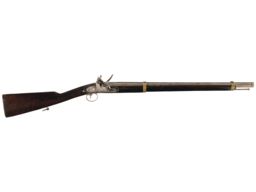 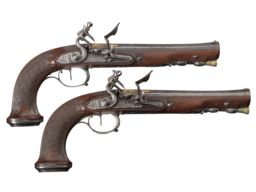 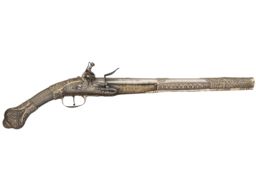 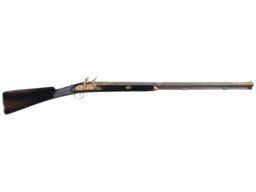 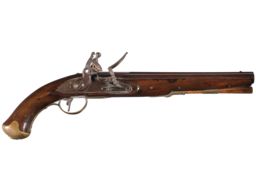