The very interesting revolver and the pendant are pictured in the article "Death on the Hill of the Bells" by Lee A. Silva in the January 1988 issue of "The Gun Report." The revolver is identified as having belonged to Emperor Maximilian I of Mexico. A copy of the article is included. The article indicates the revolver was formerly in The Harry Mann Collection and "unsubstantiated verbal provenance indicated is that it originally turned up in Mexico and was, in fact, part of Maximilian's private arms locker." Also included is a copy of the "American Society of Mexico Bulletin" from February 1958 which includes a long article on Tom Weston and his gun shop. The article notes: "Once he missed, by a hair's breadth, becoming the owner of an 18-shot revolver which had been made especially for Emperor Maximilian." The inscription on the barrel would have been appropriate for Maximilian I while he was serving in the Austrian Navy prior to leaving for his fateful "adventure" in Mexico. He was an Austrian Archduke Ferdinand Maximilian Joseph Maria von Hapsburg-Lothringen (1832-1867) and one of Emperor Franz Joseph I of Austria's younger brothers. He was installed as Emperor Maximilian I of Mexico during the Second French Intervention in Mexico in 1864 by Napoleon III. In order to do so, he had to formally renounce his rights to the Austrian throne and as an archduke of Austria. He had previously turned down invitations from Mexican monarchists to take the throne and was serving in the Austrian Navy. Though he upheld many of the liberal reforms, his reign was understandably controversial and opposed from the outset by Mexican liberals led by President Benito Juarez. With the end of the American Civil War, the United States under President Johnson supported Juarez and opposed Maximilian under the Monroe Doctrine. Napoleon III withdrew his troops in the face of sustained Mexican resistance combined with U.S. pressure and potential conflict back in Europe leaving Maximilian to his fate after he refused to abdicate and vowed to stay in Mexico. He was captured after the siege of Santiago de Queretaro on May 16, 1867, and was sentenced to death by firing squad. He was killed alongside two of his generals on June 19, 1867 at Cerro de las Campanas ("Hill of the Bells") in Santiago de Queretaro. His death shocked the international community, but President Juarez saw it as necessary to show the world that the Mexican people would not allow foreign domination. Despite being a foreign despot who issued the infamous "Black Decree" on October 3, 1865, imposing the death sentence within 24 hours of any found guilty by court martial of being an armed band or organization regardless of the group's allegiance and purpose, Maximilian showed genuine dedication to his followers and the people of Mexico. This has left him a complicated historical figure, loathed by some and praised by others. The revolver is an ingenious mid-19th century design with the significant firepower of 18 pinfire cartridges. The upper barrel has a triangular blade front sight, "Ferdinand Maximilian von Oesterreich" (Ferdinand Maximilian of Austria) inscribed offset slightly to the left, and scroll engraving on the breech section. The lower barrel is unmarked. Both are rifled. The barrel lug is marked "1476" on the left and has a "crown/N" inspector's mark on on the bottom left that the article dates to 1853-1877. The massive cylinder has 6 chambers for the lower barrel and 12 for the upper barrel, "G" stamped on the face, band of leafy scroll engraving with punched backgrounds, and Liege proofs and another "crown/N" inspector mark on the rear. The revolver alternates between firing the upper and lower chambers and has an interesting striker mechanism to accomplish this which also has the notch rear sight. The frame has coordinating leafy scroll engraving with punched backgrounds and appears to have a marking that was punched over on the left side. An "FH" mark is marked on the left side of the front strap by the mainspring screw. The stud for the lanyard ring on the butt can be unscrewed revealing a pin that can be used to eject the spent casings. The grips have relief engraved scroll and shell patterns. Included with the revolver is a silver-gilt pendant/medal for a commander of the short lived Imperial Order of the Mexican Eagle created by Maximilian I on January 1, 1865 and terminated following his execution on June 19, 1867. Maximilian's pendant from the order was sent back to his family. This medal was obviously presented to an important Officer in Maximilian’s Army and probably taken as a spoil of war as was the revolver. This is a very unusual and historic revolver.

Fine with 40% plus original blue finish, distinct inscription, and crisp engraving. The finish has mostly flaked on the engraved sections, and a smooth gray and brown patina is on the balance along with small spots of minor pitting. The hammer remains bright and has minor wear. The grips are also fine and have distinct relief carving and minor dings and scratches. The trigger return spring needs work, but the revolver otherwise functions fine. The medal is very good and has aged patina on the silver, most of the original enamel, and traces of the original gilt finish. This is a fascinating 19th century revolver with an inscription for Maximilian I of Mexico. 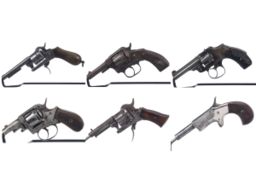 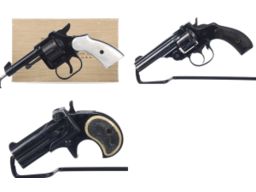 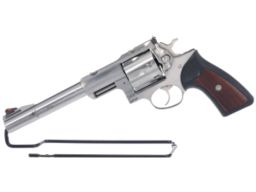 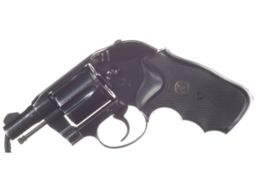 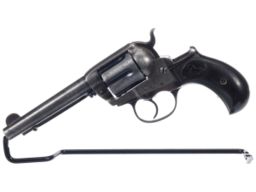 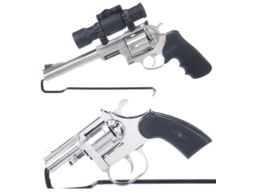