These Springfield Short "Cadet" Rifle-Muskets are described on pages 336-338 of George D. Moller's book "American Military Shoulder Arms, Volume III" with this exact rifle pictured on page 336 next to the caption "This Springfield rifle musket has a 36" barrel with two bands. It is speculated that it may have been one of the second or third quality 'Short Springfield' arms remanufactured at the armory from Model 1861 and 1863 components following the Civil War." These armory manufactured short rifle-muskets are not to be confused with the later Bannerman altered cadet style rifle-muskets. Page 336 of the book states, "The short rifle muskets made up at Springfield Armory were discussed in a June 27, 1866, letter from Brevet Captain C. C. Chaffee at Springfield to Chief of Ordnance Brevet Major General A. B. Dyer: 'There are now at the Armory ready for issue, several hundred repaired arms corresponding to the rifled musket of 1864, except that the barrels and stocks are four inches shorter, and they have two bands instead of three. They are handsome and closely resemble the Cadet Musket.'" Solid blade front and 500 yard two-leaf rear sight. Casehardened "1864" dated "U.S./SPRINGFIELD" marked lock. "1864" (partial) dated on the top flat of the breech with a star ahead of "V/P/eagle head" proofs marked on the top left flat of the breech, a single letter "M" inspection initial marked on the left flat of the breech, and a single letter "C" inspection initial marked on the left of the rear sight. The late rifle-musket lock is equipped with a Model 1861 style hammer, and the barrel has a Model 1861 style nipple bolster. The left stock flat does not appear to have had any inspection cartouches as typically seen on a standard Civil War era full length Springfield rifle-musket, and the stock itself appears to have been armory fabricated specifically for this shorter length rifle-musket. "US" marked buttplate tang. "GDM" (George D. Moller) collection initials marked at the toe of the stock. Includes a US socket bayonet and reproduction leather sling. Provenance: The George Moller Collection

Fine retaining mostly bright surfaces with some scattered brown spotting and some light pitting on the barrel. Casehardened lock turned to a smooth gray with traces of original case colors on the hammer. Stock is very fine with defined edges, some light scratches and dents, a small chip ahead of the trigger guard, and attractive raised grain. Mechanically excellent. Included bayonet is very good with scattered light pitting. 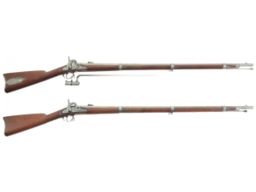 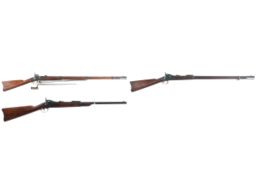 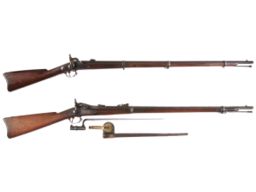 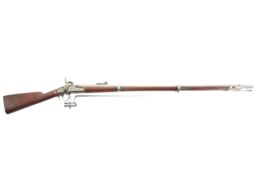 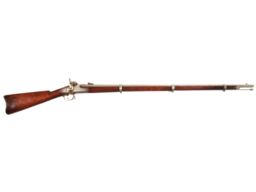 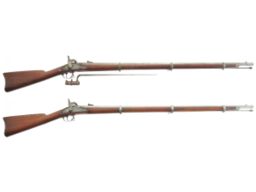