This carbine was manufactured in 1890 and later chiseled and relief engraved with extensive scroll, game scene, floral, and border engraving and silver and gold plated. The engraving was clearly inspired by the relief engraved Winchester exhibition and presentation rifles and carbines signed by or attributed to John and Conrad Ulrich (see the chapter "Signed Arms by John Ulrich" in "Winchester Engraving" by Wilson). The upper barrel band has an integral blade front sight. barrel has the two-line address and patent marking and notch and folding leaf rear sight. The frame has essentially full-coverage engraving. Even the upper edges of the cartridge elevator are engraved. The majority of the work is classic German-American scroll engraving with punched backgrounds, but the borders and game scenes are done in relief giving the engraving dimension, and there is a raised shell pattern on the receiver ring. The right side plate has a rendition of the "Monarch of the Glen" motif popular on late 19th century American sporting arms based on the painting by Sir Edwin Landseer c. 1851. The front panels of the frame on both sides had a scene of a dog and three birds. The left side plate has a wooded scene of a stag and three does. "Adam V Rose" is inscribed in a banner on the lower tang, and the serial number is also in a banner at the rear. The carbine is fitted with a nicely figured forearm and buttstock, and the buttplate has chiseled and relief engraved scroll and shell engraving on the tang and a profile bust of Lady Liberty on the heel. The stock compartment is empty. "179" is marked on the left side of the lower tang, what appears to be "699" in pencil is in the upper tang mortise of the stock, and "1193" is inside the toe of the buttplate. The identity of the engraver and Adam V. Rose are not documented. The carbine was finished in gilt-silver.

Extremely fine as elaborately custom embellished with mix of bright gold, aged silver, and aged brass. The receiver is mostly aged brass and has crisp engraving. The loading gate and several of the smaller parts have dark niter blue. The wood is also very good and has nice figure, some faint cracks in the grain on the left, and some streaks in the finish. Mechanically fine. A stunning work of art using a Winchester Model 1866 saddle ring carbine as the canvas. 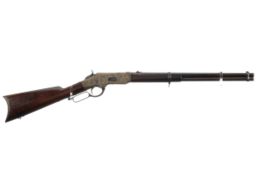 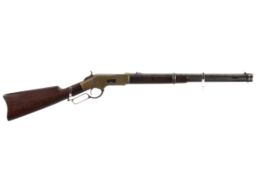 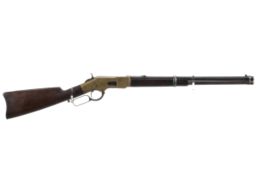 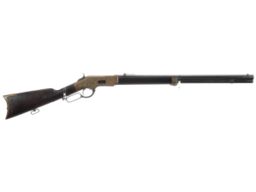 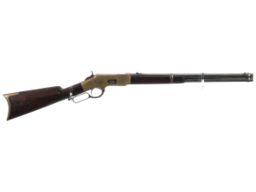 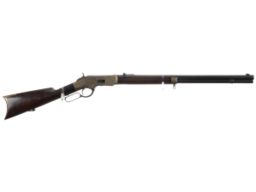