One of only 500 Model 1911A1 pistols manufactured by the Singer Manufacturing Company. Most famous for sewing machines, Singer was involved with precision manufacturing for the U.S. military, including bombsight and gyroscope production, when they were issued an Educational Order for a 500-piece run of 1911A1 pistols. The results were quite impressive, especially for a first outing, showing a quality of fit and finish comparable to Colt's pre-war commercial Government Model. While Singer's output passed muster and was accepted for issue by the Army, chiefly for issue to the Air Corps, increases in output from other 1911A1 contractors made it unnecessary to split Singer's attention. This makes the Singer 1911A1 both the shortest contract run of U.S. 1911A1 pistols, as well as the only handguns made by Singer Manufacturing. Fixed sights, with re-engraved "S. MFG.CO./ELIZABETH, N.J., U.S.A." on the left side of the slide and the re-engraved "JKC" initials of Col. John K. Clement (New York Ordnance District Executive Officer) on the left side of the frame. The right side of the frame, between the serial number and trigger, is marked "RIA", indicating post-WWII overhaul of the pistol at Rock Island Arsenal (Pistol was subsequently professionally restored). Features include a flat top rear sight, wide knurled hammer, short machine knurled trigger, long grip safety, checkered slide stop, thumb safety and mainspring housing, Keyes Fiber grips, "R" marked full blue magazine and a High Standard barrel. 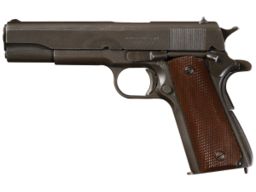 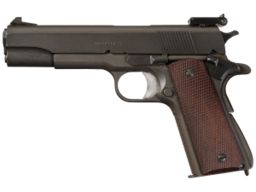 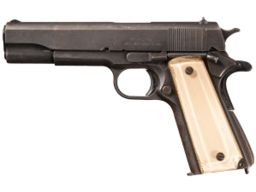 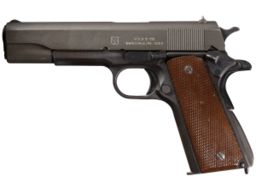 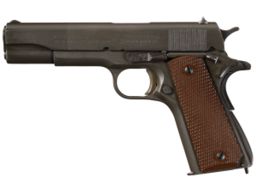 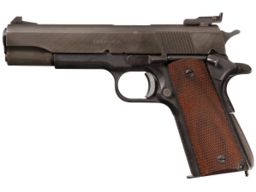