This is an example of a British Kerr retailer marked Second Model 1876 Carbine with the dust cover guide rail attached to the top of the receiver by two screws and the dust cover with the checkered thumb oval on top. The included Winchester letter confirms the serial number and carbine configuration. The carbine was received in the warehouse on March 12, 1880, returned on September 6, 1880 and shipped from the warehouse on December 27, 1880 (order number 23403). The carbine has a fixed front sight and a folding rear carbine sight on a barrel marked with the two line Winchester/King's Improvement marking and there are no caliber markings. The left rear of the barrel is marked with three British proofmarks, the top of the receiver is marked with a "crown/V" proofmark and the left side of the receiver is marked "LONDON/JAS KERR & CO/54 KING WM ST. E.C." The upper tang is marked "MODEL 1876" and the lower tang has the serial number. A saddle ring and stud is present on the left side of the receiver. The carbine has a full forearm with a steel end cap and straight grip stock with a steel carbine buttplate. The right side of the stock is stamped with a circular cartouche.

Very good plus. The carbine retains 20% of the original finish, with the balance having a smooth mottled brown patina. The barrel and receiver have a few scattered minor dings. The wood is also very good with some shallow gouging on the stock, a couple of moderate gouges on the forearm, a number of minor dings along the upper edges of the forearm and scattered minor dents and dings. All markings are clear and crisp. The action functions fine, but the lever is loose when not retained by the catch. 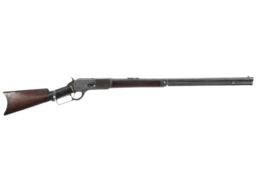 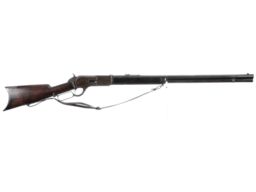 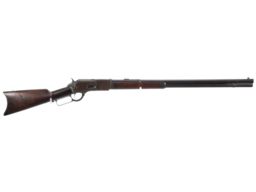 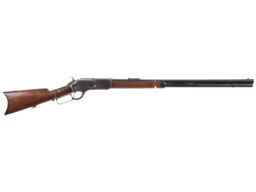 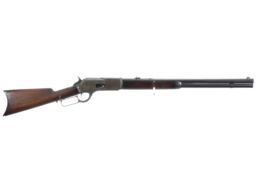 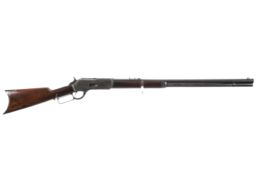