This virtually unused U.S. Contract Colt Cavalry Model Single Action revolver was manufactured in 1875. Nearly all of the Cavalry Model Single Action revolvers manufactured in 1875 were issued to U.S. Cavalry regiments on the frontier. The serial number of this revolver falls between the serial numbers of two revolvers issued to cavalry regiments: Serial No. 17004 was used by the Troop C, 5th Cavalry Regiment in 1886 and Serial No. 17128 was issued to Troop F, 7th Cavalry Regiment in 1888. The revolver has a military blue finish on the barrel, ejector housing, trigger guard and back strap. The frame, hammer and loading gate are color casehardened and the one-piece walnut grip is oil-finished. The revolver has the early "bullseye" ejector rod head, first style ejector housing with barrel boss and "cavalry" hammer with bordered elongated knurling on the spur and cone-shaped firing pin. The top of the barrel is roll-stamped with the first style, "script" barrel address "+ COLT"S PT. F.A. MFG. Co. HARTFORD CT. U.S.A. +" with slanted crosses at either end. The left side of the frame is roll-stamped with the Colt, "two-date/two-line" patent marking followed by a small "U.S." property mark. The assembly number, "807" is stamped on the inside of the loading gate. The small "C" sub-inspection mark used by A. P. Casey is stamped below the serial number on the trigger guard and on the right heel of the grip. A second, "J" Ordnance sub-inspection mark is stamped on the underside of the barrel and on the side of the cylinder. Dual inspected Cavalry Model revolvers like this example are very scarce. A "P" proof mark is stamped on the underside of the barrel below the sub-inspection mark and on the side of the cylinder. Colt "G" and "C" inspection marks are stamped below the ejector housing barrel boss. "C" is stamped on the rear face of the cylinder and in the hammer well above the firing pin hole. The full serial number, "17018" is stamped on the frame, trigger guard and back strap. The partial serial number, "7018" is stamped on the barrel beneath the ejector housing and on the side of the cylinder. All of the visible serial numbers match. The lower left side of the grip is stamped with the script initials "ACP" in a rectangle with rounded ends.

Extremely fine. The revolver retains 70% plus of the original blue and 80% casehardened finish. The smooth dark patina, on the barrel and other blue components and the original blue finish have merged into an attractive blue-brown patina. Considerable amounts of the original blue finish remains visible in good light. The "feathered" polishing marks on either side of the front sight blade are visible on the barrel. The cylinder has most of the original blue finish with high point wear and a drag line between the stops. The frame, hammer and loading gate show silvering or age spotting on contact points but retain most of the original casehardened finish with strong case colors in protected areas. The markings on the barrel, frame and other components are crisp. The walnut grip is also very fine with light-moderate handling wear and clear inspection marks on the lower left side and right heel. The frame and grip screws show significant amounts of niter blue finish. The action is crisp and functions perfectly. This is an outstanding example of both a very scarce and highly desirable, 1875 production Indian War Colt Cavalry Model Single Action revolver with dual "C" and "J" sub-inspection marks. 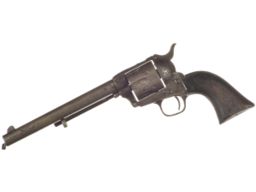 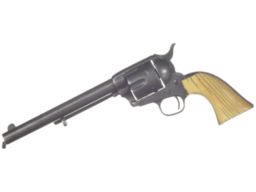 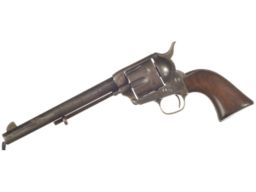 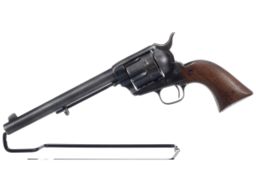 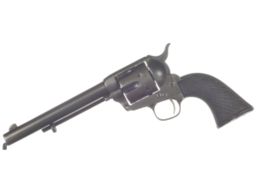 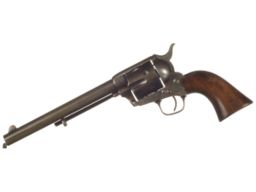