This is an excellent example of the desirable Colt "Transitional" Model 1911 Pistols manufactured and delivered to the Army in 1924. The "Transitional" Model pistols are serial numbered between 700001 and 710000, having all the Model 1911A1 features although the right side of the slide is marked "MODEL OF 1911.U.S.ARMY". The transitional changes included a modified main spring housing, milled clearance on the sides of the receiver behind the trigger, shortened hammer, lengthened grip safety tang and reduced trigger length. The diamonds on the grips surrounding the screws were eliminated. The pistol features a brush blue finish. Although the "Transitional" pistols were delivered to the Army, Springfield Research Service records show large numbers of these pistols were actually issued to the Navy. The left side of the frame directly above the magazine release is stamped with the early placement "WTG" (Walter T. Gorton) monogram in a circle utilized on only the first approximately 100 pistols. The opposite side is marked "UNITED STATES PROPERTY/No 700005". The left side of the slide has the Colt 1897-1913 patent dates in a two-line block followed by the two-line Hartford address. The Rampant Colt is located between the patent dates and the address. The rear of the slide is marked with the "H" inspection mark above the firing pin stop. The top of the chamber is marked with a conjoined "HP" proof, and the upper right side of the trigger guard is marked with a "20". The grips are the full checked walnut pattern introduced on the "Transitional" Model 1911 pistol. Low profile fixed sights, the trigger, slide stop, thumb safety, hammer and main spring housing are checkered, the magazine is two tone with a "B" stamped on the toe and there is a lanyard ring on the heel. The accompanying factory letter verifies the "Transition Model", caliber, barrel length, blue finish with the grips as "Not Listed" and that it was sold to the U.S. Government and shipped as 1 of 1,000 to Springfield Armory, Springfield, Massachusetts on January 23, 1924. Special features state "furnished with a new style trigger, grip safety and mainspring housing." and the remarks state "Although these pistols are categorized in the Colt records as Model 1911 pistols, they are furnished with the Model 1911A1 improvements. The serial number range of these "Transition Model" pistols is 700,001 to 710,000." This pistol is pictured on page 29 of "U.S. Military Automatic Pistols", Volume II by Edward Meadows.

Near mint as professionally restored. The pistol retains 99% blue finish with slight wear limited to the front edge of the slide and high points on the pistol, and light handling marks. The grips are excellent with light lower edge wear, light handling marks and sharp checkering. The markings are highlighted in white and remain crisp and clear. Mechanically excellent. 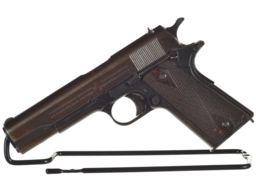 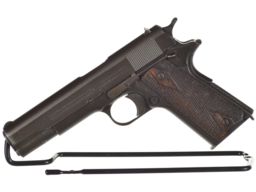 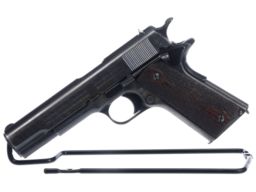 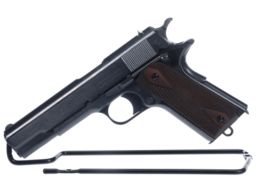 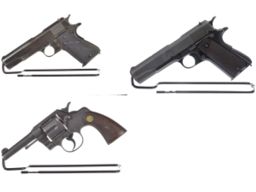 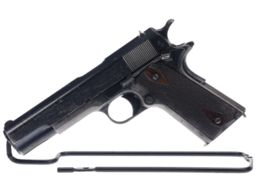