This is a really rare post war assembled Krieghoff Luger pistol that has a personalized side frame inscription. This rare pistol should not be confused with the P.08 Krieghoff Lugers that were assembled after WWII by Krieghoff that were sold through the PX system. This example is probably a one of a kind Luger that was assembled with various left over factory parts that was presented to an Army Corporal for his kindness to a local German worker. As the story goes, Cpl. Benjamin R. Hawes was a U.S. Army cook assigned to the 663th FA Battalion that was stationed in Suhl Germany at the end of the war. On a couple of occasions he was approached by a local German asking for food. In his kindness, he took pity on the man and gave him some food. A few days later he was approached by the same man and was presented with this Luger pistol as token of his appreciation with the comment, "this is for the food you gave me, it has your name and my name on it". The side of the frame is clearly inscribed; "BENJAMIN R. HAWES/GERMANY 1945/HEINRICH KRIEGHOFF/SUHL", in an etched pattern. This information and comment is documented in an signed and notarized statement by his son, Owen R. Hawes. The pistol itself is actually made up from mostly original Krieghoff Luger parts, which are the pistol frame, barrel extension, toggle assembly various internal parts; e.g. trigger, take down lever safety and magazine release button. They are all late manufactured parts that were assembled. The action is tight as it received minimal hand fitting. The barrel and complete breech bolt are older WWI parts that have either the Erfurt Eagle firing proof and or the Crown/RC proof that were used to complete the assembly. The under side of the barrel is numbered "3162", indicating it was removed from an earlier Luger pistol. The lower left side of the frame area under the grip, the underside of the recoil lug on the barrel extension, and the underside of both toggles, all carry a serial or assembly number of "22", clearly indicting that these were original parts from the Krieghoff factory. All the major parts, assemblies and various smaller parts have the same style of polishing and color, so they are consistent with the story. It is fitted with a set of walnut grips that have been beautifully hand carved "Oak Leaves and Pine Tree Branches" on each side; (obviously the Germanic influence) with the center section of the left grip, also having been beautifully carved with the large initials: "BRH", (Benjamin R. Hawes), in relief. The right side as noted is also carved with the same pattern with the center section left blank, probably also intended for some kind of inscription or medallion. Also accompanying this scarce Luger is a small silver medallion, (about the size of a quarter) that is inscribed on one side, "Germany/ Suhl 1945" with the reverse engraved with the large matching initials of "BH" for Benjamin Hawes. This historic Luger is accompanied by the Honorable Discharge papers from Cpl. Hawes, along with his military record, and the capture papers, dated Sept 1945.

Very fine with 90% of the slightly original blue finish overall with edge and high spot wear with some thinning and browning of the grip straps. The grips are in fine condition with exquisite deep, professionally executed relief carving. The only exception is the upper right corner has the typical small chips under the safety. Mechanically excellent. Also includes the documents noted above. A very rare and scarce side frame inscription Krieghoff P.08 Luger pistol. 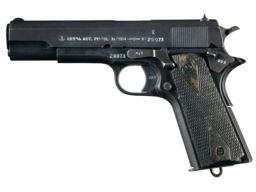 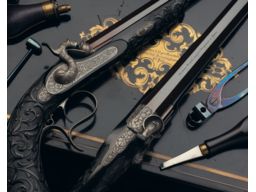 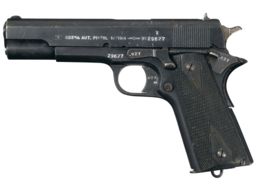 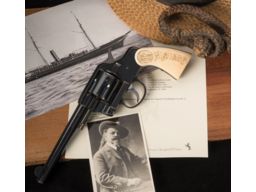 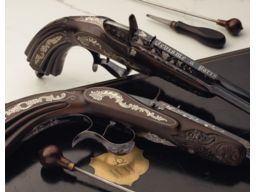 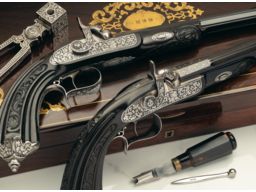