This is a very nice example of a 1900 DWM "American Eagle" Test Luger as developed and sold to the U.S. Government around the turn of the century for test trials. In April 1900 the Ordnance Board authorized an order for 1000 DWM model 1900 Luger pistols, which were delivered in two separate lots; approximately 800 on 26 October 1901 and the remaining 200 on Oct 29 1901. The first lot of serial numbers were in the 6,100-7,100 range, with the second lot in the 7,200 serial number range. These early American Eagle Test Lugers were made expressly for the U.S. military when they were interested in the Luger as a replacement for the 38 caliber revolvers that were in service in the late 1890s and early 1900s. The three most distinguishing features noted on all these Lugers were 1) there were no German acceptance proof marks, 2) they lacked the typical "Germany" export markings usually found on the front of the frame or under the barrel and 3) the last two digits of the serial number was stamped on the rounded portion of the opposite side of the take down lever. The only other feature found on some but not all of these test Lugers was a small German ordnance proof that resembled the U.S. Ordnance bomb proofs. This mark was sometimes found on the bottom of the wooden magazine base and inside the front frame recess area. This specific pistol has only the very small proof on the base of the magazine, and not inside the frame, however it is an authentic "American Eagle" Test Luger. The top of the chamber area was also marked with the large "American Eagle" logo. Both sides of the barrel extension are correctly unmarked without proofs. The bottom of the barrel is marked with only the serial number of the pistol. It has the commercial style serial numbers with the full number on the barrel and frame with the partial number on the underside of the barrel extension and small parts. The wood base magazine is unnumbered. The pistol has the prewar blued finish with the safety, trigger, take down lever and ejector having a straw color. It is complete with an equally rare, original U.S. Calvary Test Eagle leather Holster. The holster has the large "U.S." on the front flap with the inspector initials of "E.F.J." stamped on the lower edge with "13th CAV/3" on the upper front corner. The back of the holster is stamped: "ROCK ISLAND ARSENAL/E.H.S"

Fine with 80% of the faded original blue finish overall with edge and high spot wear with thinning and oxidation present on the grip straps. The straw colored components are 50% intact with the tube down lever having been restored. The grips are in very good condition with nice distinct checkering on both sides with wear across the tops of the checkering mixed with a couple minor handling marks. The holster is in very good condition with a nice medium brown color overall with clear distinct markings on both sides. The holster shows age cracking of the leather across the top edge of the flap where it hinges with some minor separation of the leather on the out edge of the flap. The stitching is intact. A very nice early Luger test rig with an original early test Luger and original leather test holster. 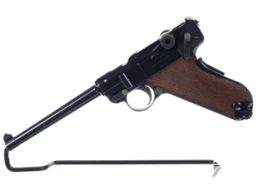 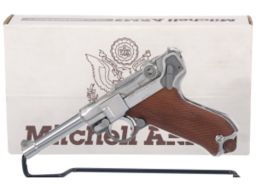 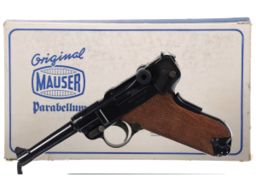 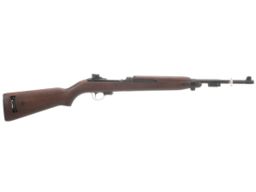 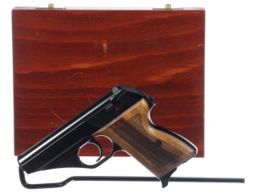 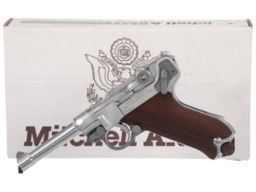