This is a fabulous, all original and unaltered example of the rare WWI era 1918 Mark I Pederson Device as designed for the Mark I 1903 Springfield Bolt Action Rifle. These are the apex of any high end Model 1903 Springfield rifle collection. As we all know these rare Pedersen Devices were developed in late 1918 and were designated as the "Automatic Pistol, Caliber .30, Model of 1918 Mark I". The Pedersen Device itself consisted of a semi-automatic bolt assembly and detachable stick magazine that was designed to replace the complete bolt assembly in a U.S. Springfield Model 1903 Mark I Rifle; which would then convert the rifle into a semi-automatic weapon. The Pedersen Device was intended to provide the infantry man with a close range, semi-automatic rifle for assaults on enemy trenches, but still retain the capability of converting the rifle back into a high powered bolt action rifle for long range combat. The Army planned to introduce the Pedersen Device in the offensive against the German Army in the spring of 1919, however when WWI ended in November 1918, all the Pedersen Devices were placed in storage. The device itself fired a low velocity .30 caliber type pistol sized cartridge designated: "Caliber .30 Automatic Ball Pistol" to disguise its intent. The device used a 40-round stick magazine that was inserted into the right side when the Pederson Device was installed in the rifle. After firing the spent cartridge was ejected through an ejection port on the left side of the 1903 Mark I rifle receiver. After WWI the device was classified as a secret weapon until 1931 when the security classification was removed from the Pedersen Device and all of the devices were ordered to be destroyed. The destruction was nearly complete as fewer than 100 Pedersen Devices are estimated to be in collections and museums today. The Pedersen Device itself is marked on top of the cocking piece in two blocks: "U.S.A. 1918-MARK I/40695" with the right side marked: "REMINGTON-BRIDGEPORT/PEDERSEN'S PAT'S. PENDING" in two-lines. When all of the devices were ordered destroyed, there supposedly burned first and then crushed. This device is completely intact and unaltered! It is complete with one original (and very rare) 40 round stick magazine, an 1917 web belt that is marked "R&B CO./may 1918, three original canvas magazine pouches, and one original canvas pouch for carrying the dismounted bolt assembly.

Very fine with 85% plus of its original parkerized finish overall with only minor edge and high spot wear. The markings are clear and sharp overall. The magazine is also in excellent condition and appears fully functional. The belt and various pouches are all in excellent condition. A super rare all original complete rig. 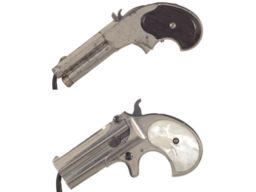 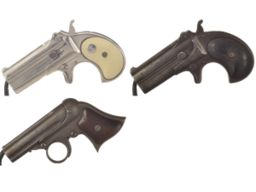 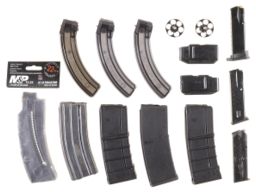 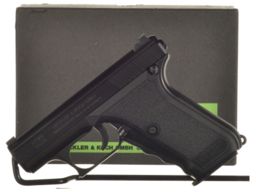 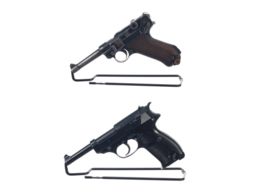 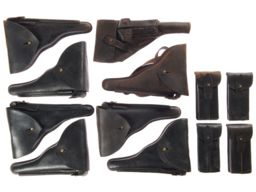