This is an example of the Werder Model 1869 pistol that was used by the Bavarian military in the late 19th century. The model earned the nickname "Lightning" because in the hands of a practiced soldier it could fire up to 20 rounds a minute despite being a single shot breech loader. Only a few thousand of these pistols were produced and many have been lost, altered or abused. This example avoided such treatment and is marked with the matching serial number "216" on the left side of the major components. There are no visible maker's marks on the barrel which has an octagonal section at the breech and is equipped with a correct dovetailed blade front sight on an integral raised base. The rear sight is a notch in the rear of the action. The right side of the frame has the Bavarian unit markings "421CRI" crossed out over "1A21" and the rear has "1877/1872". It has two "triggers" one for opening the breech and the other for firing. The right side of the action has a lever that works as a safety by preventing the action from cocking and firing if snagged. It is fitted with a set of two-piece walnut grips and a lanyard loop.

Very good as Arsenal refurbished. The pistol retains 40% of the Arsenal finish with a brown patina forming, some overall minor marks and scratches and patches of oxidation and slight pitting. The markings are crisp throughout. The revarnished grips are fair with small pressure marks, a slight crack near the right side escutcheon and general handling wear. The action is fine. 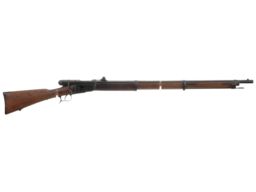 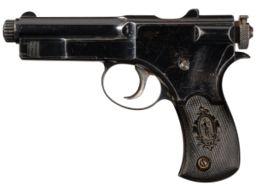 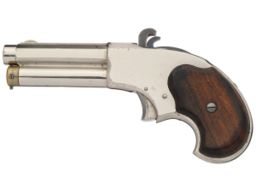 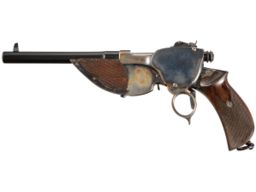 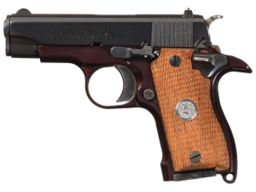 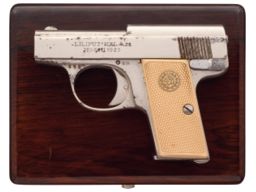