This is another exceptional example of a very rare, John D. Pedersen Self-Loading Carbine manufactured by the Vickers-Armstrongs LTD. circa 1932. The Pedersen Self-Loading design was the result of U.S. Army interest in development of a semi-automatic infantry rifle following WWI. In 1923, the Ordnance Department awarded John D. Pedersen a contract to develop a semi-automatic rifle for the Army. Pedersen developed the .276 caliber Self-Loading Rifle. The Pedersen rifle was tested by the Ordnance Department and recommended for adoption in 1928. However, after additional testing in 1931, the Infantry Board recommended that the Army develop the T3 Garand semi-automatic rifle manufactured by Springfield Armory rather than the Pedersen rifle. Pedersen had previously contracted with the English firm Vickers-Armstrongs LTD to manufacture his rifle in 1930. Vickers-Armstrong manufactured an estimated total of 200 Pedersen Self-Loading rifles for testing by the British Government. They also produced a very limited number of Carbines for testing/use by the Cavalry; with this being one of those rare Carbine models. After the Army discontinued development of the Pedersen rifle, a limited number of rifles were sold to China and Portugal, and the Japanese also produced a few test samples based on this same delayed-blow back toggle mechanism. This rifle is chambered for the .276 rimless cartridge and has the distinctive Pedersen Self-Loading rifle features which include: (1) 10 round box magazine loaded with en-bloc clips,(2) fine adjustable, 1/2 minute rear sight, (3) unique 22 inch barrel with spiral cooling fins, (4) perforated metal hand guard and (5) sliding bar safety in the bolt, 6) with the short "carbine" length stock. The metal components have a dull military blue finish, and the one-piece, black walnut, stock is oil finished. The left side of the receiver is roll-stamped: "PEDERSEN SELFLOADER P.A/VICKERS-ARMSTRONGS.LTD" in two-lines. The serial number "254" is stamped on the right rear of the receiver. The top of the sliding bar safety is marked "REDY" on the left side and "SAFE" on the right side. An encircled "C/2" is stamped on the top of the receiver. There is an early Birmingham Nitro proofmark (used until 1925) stamped on the top of the front edge of the bolt and the left, rear side of the receiver. This is a high quality, well-finished carbine with finely milled components. The Pedersen Self-Loading Rifle was the primary competitor to the T3 semi-automatic rifle developed by John C. Garand and is a key piece in the development of the M1 Garand rifle. This Pedersen Self-Loading carbine would be an important addition to any advanced collection of U.S. military or British rifles.

Excellent with 98% plus of the original dark parkerized finish overall with only a hint of edge wear. The light walnut stock is also in excellent condition with only a few minor handling marks on the side of the stock below the receiver area. This is an exceptional example of a very rare Vickers & Armstrong, Pedersen Self-Loading Carbine of which only a handful were actually manufactured. 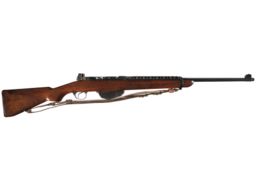 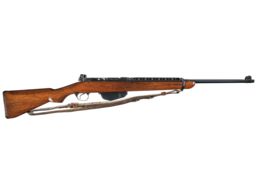 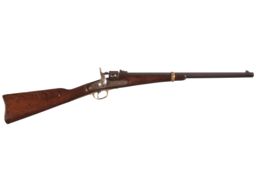 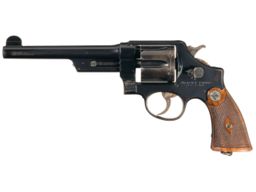 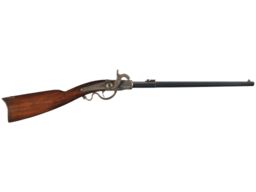 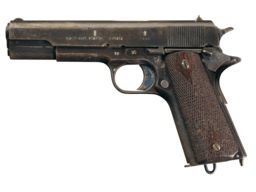