This is a fabulous example of "one of three" different J. C. White "Experimental" semi-automatic rifles that we have for sale in this auction. These three White experimental rifles remained virtually undiscovered for over 50 years in an unknown martial arms collection until discovered and purchased in 2006. This amazing discovery is discussed in the fall 2006 issue of the Garand Gun Collector Journal, on pages 3-11 with these very unique and intriguing rifles being discussed in several areas of the books "Hatcher's Notebook" and the "Book of the M1 Garand" by Julian Hatcher. It is amazing that all three rifles were still together after all these years and all three were stored in the same wooden box. These three rifle were developed as prototype/test example for the U. S. Army in the early 1930s when the U.S. Army was looking for a new semi-automatic rifle. All three are certainly "unique" and certainly "One-of-a-Kind" rifles that represent three different approaches being developed for the U.S. Military. The White story is intriguing and sketchy at best, and began in 1929 when the War Department issued an invitation to all manufacturers for the development and submission of candidate semi-automatic rifles for testing. In August 1929, J.C. White, who was a young engineer and firearms inventor that was working for the United Shoe Machinery Company in Mass at the time, presented to the U.S. Ordnance Board his unfinished, early prototype semi-automatic rifle designed for testing and evaluation. As part of his submission, he asked that he be granted an additional six-weeks extension to complete his rifle so that a full and complete evaluation could be conducted of his weapon. His weapon was accepted, however, he was denied the extension and as such his candidate weapon was disapproved. At that time the U.S. Government already had on hand, "six" different candidates for testing and evaluation; four were rejected with the other two being approved for further testing; those being the M1 Garand and Pedersen rifles. Undaunted he continued to work and develop his candidate rifles and in so doing in May 1930, he did submit it to the board "two" other completed rifles for testing. This example was actually designed and submitted as a 30 caliber (30-06) "Light Machine Gun" for testing by the Ordnance Board, although this example only fires in a semi-automatic mode. The gas system of this design is very similar to a long-operating rod type gas system as used on the M1 Garand, FN-FAL and AK47 type rifles, where the left side of the receiver has a long tube or housing which contains the actual operating rod that is attached directly to the left side of the breech bolt. It also uses the same concept of a gas impingement system on the front left side of the barrel to bleed off gas during the firing cycle to actually drive the operating rod rearward. This rifle has been actually identified as the predecessor to the later .276 self-loading rifle, with its gas system that evolved into the M1E4 rifle. Although awkward it was innovative and very unique for the time. Some other interesting features of this design are that it fires from an open bolt, it was fitted with a detachable box magazine. Also it has unique bolt locking block that is mounted on the rear of the bolt instead of on the front end. This design although very unique, was rejected by the U.S. Ordnance Board's and in the report it was noted that it was intended to demonstrate the gas-system on the rifle, however it went on to criticize the weapon by saying that it was too heavy, had no provisions for a quick change barrel, bipod, or tripod, the location of the gas cylinder and operating rod would adversely affect the accuracy of the rifle. It also went on to say that the rifle was sufficiently developed for military service requirements. It is fitted with a 1903 Springfield barrel that was provided by the Government for companies interested in developing rifles for service use. The barrel is marked SA 11-16/A with the rear end modified for this action. It has a full length, very heavy and robust walnut stock with cooling holes on the underside like the other two rifles, with finger grooves on the sides. The rear half of the stock (the buttstock portion) is identical to an "S" stock for a 1903 Springfield rifle. It has a high, fixed blade front sight with no provisions for a rear sight. A very unique and certainly one of kind White experimental gas operated semi-automatic rifle. It is accompanied by the noted GCA article, a short article by Anthony Williams on the history of the White rifles and copies of the various patent filings for this rifle.

Very fine with much of the dull prototype blue finish overall showing minor handling marks and blue lose on the top and side of the receiver from cycling the actions. The stock is also in very fine condition with only very minor handling marks on the sides in some areas. A very unique early J. C. White's rifle design. 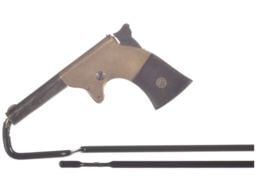 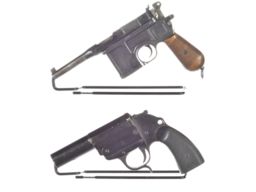 Lot #4508: One German Semi-Automatic Pistol and One Flare Gun 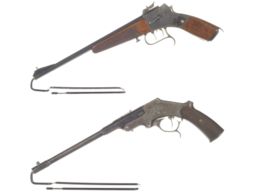 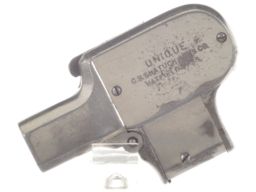 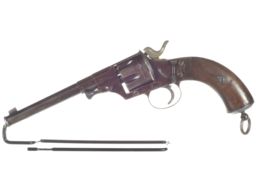 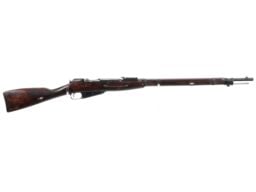