This is the only recorded example of a multi-shot pistol of its type, allowing one astute investment buyer or collector the opportunity to acquire a remarkable keystone piece of firearms design and craftsmanship but also an important piece of world history. Manufactured circa 1600-1610 in Saxony. It was likely manufactured by one of the talented Dresden gunsmiths who manufactured fine arms for the Electors of Saxony including Prince Christian II. The scrimshaw designs, pear shaped pommel, and engraving designs match known pistols manufactured in Dresden by Hans Stockmann and Hans Fleischer and follows similar patterns to the pistols used by Elector of Saxony Christian II's guard in the first decade of the 17th century. The upper barrel has some light engraving patterns on the octagonal section, and the lock has intricate engraving patterns including on the interior components. The top jaws have gilt-bronze female busts. Faces are also among the designs on the stock inlays most notably at the breech. There are lion faces on the sliding pan covers, and a bird scene is on the inlay on the straight wrist. The pistol has no sights and no provisions for a ramrod. It was previously in the Saxon Electoral Armouries in Dresden and first entered the private market in 1927 through Rudolph Lepke in Berlin. It is pictured on the cover of "The Gun Report" from March 1985 where it is noted as "Hans Stockmann style." A copy of the issue is included. The 1927 description, however, noted that the stock had the initials "HF" (Hans Fleischer also of Dresden). The "HF" was likely on one of the since replaced inlays .

This pistol has survived traversing the Atlantic, two World Wars, and the ravages of time. Very good. A few of the stock inlays have been carefully restored for preservation with expertly scrimshawed pieces with coordinating patterns which is to be expected on a 400 year old pistol. The metal surfaces have a light gray patina and some slight spots of pitting. The stock is also very good and has minor handling and storage marks, an absent cross pin ahead of the lock, and some old arsenal collection repairs. No doubt a once in a life time opportunity. 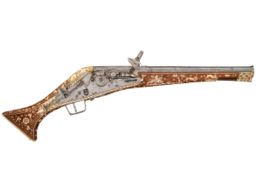 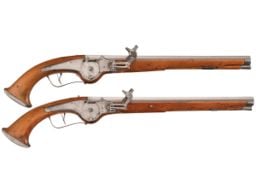 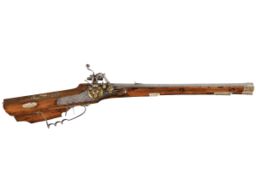 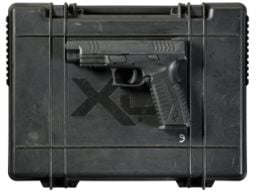 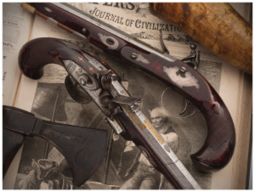 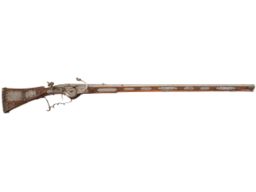