Only an estimated 1,200 of these revolvers were manufactured by James Reid of New York in the early 1860s. This example has the straight line frame fitted with an ejector rod. It is marked "ADDRESS W. IRVING 20. CLIFF ST. N.Y." on the top of the barrel and has the serial number on the bottom of the barrel, rear of the cylinder (partial), right side of the grip frame and underside of the right grip. It is equipped with a half-moon blade front sight, frame groove rear sight, sliding recoil shield on the right for loading and a pair of smooth grips. The exact revolver is photographed on the top of page 50 of "James Reid and His Catskill Knuckledusters" by Taylor G. Bowen. Page 35 notes that Reid likely believed that Rollin White's bored through cylinder patent was invalid due to earlier international patents and the fact that multiple companies produced revolvers using the system. It is assumed Reid was able to get away with violating White/Smith & Wesson's patent rights because he was a small time manufacturer. In the meantime, many other manufacturers were defeated in the courts. The fact that most of these early revolver do not have Reid's name on them likely also helped.

Very fine. 60% of the bright original high polish blue remains with the balance a light brown patina. The grips are also very fine and have some minor edge wear, small dings and a few scratches. The action functions fine and the markings are crisp. 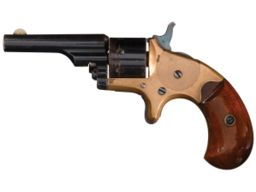 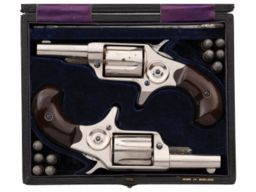 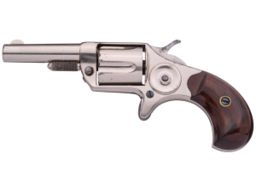 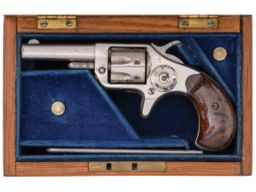 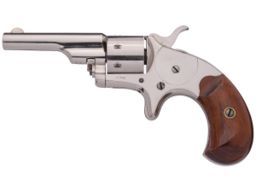 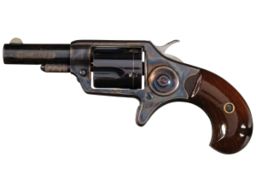