This is a very good example of an early production "Gas Trap" M1 Garand that was manufactured by Springfield Armory, that has been assembled back to it's starting configuration with almost all of the early parts. The receiver is serial numbered "6927" and based on the book "The Gas Trap Garand" by Billy Pile, the data sheet would place the production of this rifle sometime in Nov/Dec 1938. It has been correctly arsenal rewelded for the seventh round stoppage problem in accordance with arsenal specification. The parkerized finish on the receiver is a late WWII dark green parkerized finish with the heat treated rear heel which probably dates it to 1944-45. The right side of the receiver is marked "D-28291"only with no heat lot marking which is correct. The right side of the barrel has no markings on the side of the barrel, however the top is correctly marked with the D-28286 T2-A drawing number and heat lot number. It is fitted with the following early correct parts; operating rod: 2nd variation, unmodified, marked D35382-O, which is fitted with a reproduction keystone, two-piece recoil spring, Bolt: D28287-1, rear sights, windage knob: open arrows, finely machined edge, marked "LEFT/LEFT", elevation knob: has the slightly larger open arrows, marked "BATTLE/RANGE/ UP/DOWN", rear sight aperture: "B-8868-1, rear sight cover: stamped "B8872", (numbers stamped together no space or hyphen), trigger guard, milled: machine marked "C 46025" (with 2 circular rings around the takedown hole), trigger housing: marked "D 28290" (with small round hole above the trigger), hammer: machine marked on the side "C-46008-1, trigger: unmarked with traverse hole through the side, safety: machine marked "C-46015-3", follower rod: 1st model, unmarked with round recoil spring, follower and slide: early version stamped 1 on the underside, Operating rod catch assembly or accelerator: marked with the number "0" on the front, follower arm: machine marked on the side "B8869" no spaces, bullet guide: early milled version machine marked, "B-8875", follower arm pin: standard production version with steps, Gas Trap gas cylinder: 2nd version marked "D-28289-1" with square front sight base, gas plug and front sight: both early but unmarked. Stock and hand guards: rear hand guard: early version without drawing number on the side, correct no relief cut for the operating rod, (now it has been dent by the hand guard) with extended lip on the front ferrule, with early milled band with circumferential groove with fixturing holes; Middle barrel band, milled with circumferential groove no drawing number with lower areas machine-out, no cross pin, stock: correct early version with the long barrel channel with no internal marking or number and no visible cartouche or P proof. The front ferrule is marked "C-46013-1" and it is fitted with the correct early NO-Trap butt plate, (the end of the butt stock has the two holes the top is larger and the bottom one smaller. It has not been routed out for the later hinged butt plate and it has the correct lower sling swivel screw, marked "B 8881-C" and lower sling swivel marked "B-8889".

Fine as assembled/restored back to it's starting configuration with 85% of the current gray/green parkerized type finish as assembled with the various original parts noted above. The stock and handguards are all in good condition have been arsenal refurbished a long time ago with a nice dark brown color overall mixed with numerous light pressure dents and dings overall. At one time the forend of the stock had split, front the ferrule to the front edge of the trigger housing, which has been nicely glued to secure it together. Still a very nice looking example with mostly correct early M1 Gas Trap parts. Mechanically fine. 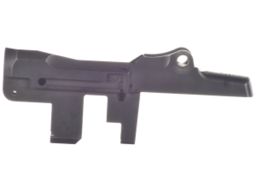 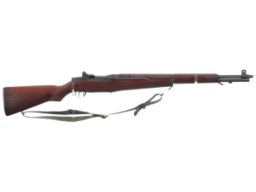 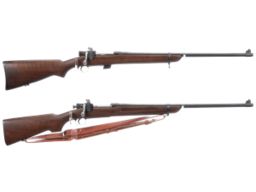 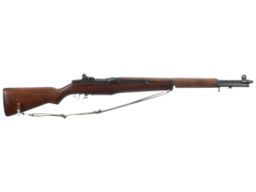 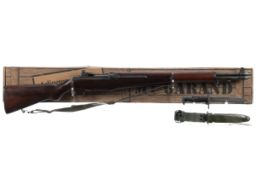 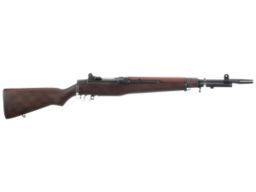