This is a full-stock version of an early Mauser Model 1913 Self-Loading sporting rifle that uses the same exact style of double camming action as the Mauser Model 06/08 self-loading pistol. In this design, the rear of the action has a small top cover that lifts off and inside are two opposing, long camming arms that swing inward to lock the bolt in the forward position. These rifles and corresponding early Mauser pistol were produced in exceptionally small quantities on a very limited basis as they were way too complicated to manufacture and operate. Most examples were owned by aristocrats or extremely wealthy industrialists. The very few surviving examples were manufactured primarily for commercial sales, but there are a very few examples used by the German military prior to WWI. This rifle has a fairly unique action in that you have two small sliding, bolt release locks, one on each side of the receiver, that the user has to push forward to pull the bolt rearward to cock the action. The cocking lever is actually mounted on the top front edge of the bolt. The beautiful rifle is marked on the left side of the action: "Mauser's Patent 1913". It has a 24-inch round barrel with the cocking handle actually doubling as the rear sight and a small bead front sight dovetailed into the nose cap. It is fitted with a five shot detachable box magazine. The rifle is fitted with a full length Mannlicher style pistol grip walnut stock with full length top handguard that is held on with two small screws. The stock has the traditional small European pre-war style pistol grip and oval cheekpiece. The stock has hand-cut checkering on the side of the pistol grip and forend and is fitted with a steel buttplate with the top half finely checkered and the bottom half heavily stippled. It is serial numbered "156" on top of the very front edge of the receiver, the rear of the barrel, the top of the breech bolt, under the top cover, and on all the small internal parts. The trigger plate and screws are all stamped with the assembly number "1." The barrel, trigger guard, and receiver have a rust blue finish while the bolt and magazine follower are polished bright. There are no visible Mauser proofmarks.

Very fine with 90% of the blue finish overall with edge and high spot wear, thinning on the top cover from handling and carrying, and the floor plate and edge of the detachable magazine have browned out. The stock and handguard are both in very good condition with numerous small handling marks and scratches on the sides overall mixed with some small light pressure dents in some areas. The checkering is fine with distinct, visible checkering overall mixed with light wear and some minor handling marks. A screw is missing from the top center of the handguard. It mechanically functions but is quite complicated in operation and requires much care and patience! This is an extremely rare example of an early Mauser Model 1913 self-loading rifle. 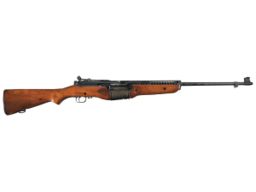 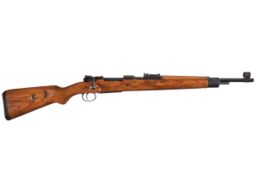 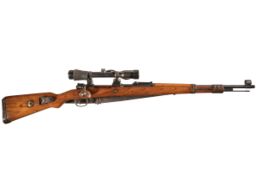 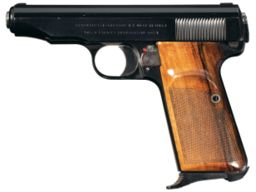 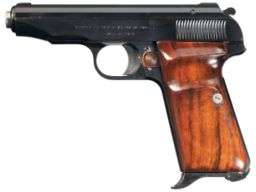 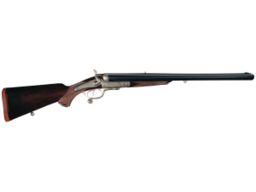