This was the first large frame Colt revolver manufactured especially for the metallic cartridge and was not a conversion. Colt manufactured approximately 7,000 of these revolvers in 1872 and 1873. The frame, barrel and cylinder were produced for the 44 metallic cartridge. The grip frame and some internal parts were taken from the 1860 Army and 1851 Navy. The Model 1871-1872 revolver paved the way for the Single Action Army which came out shortly after this model and was an immediate success despite the lack of commercial success and non-acceptance by the U.S. Ordnance Department of the 1871-1872. The top of the barrel is marked "- ADDRESS COL. SAML COLT NEW - YORK U.S. AMERICA -". The left side of the frame is marked with the two July 1871 and 1872 patent dates. The cylinder is roll engraved with the Texas naval scene and marked "COLTS PATENT No", and the complete matching serial number is marked on the barrel, frame, trigger guard and back strap. Blade front sight and the rear sight is aa integral notch on the breech end of the barrel. Fitted with one piece varnished walnut grips.

Fine. The barrel lug, protected areas of the trigger guard, the top and upper sides of the back strap shows 30% original bright blue finish with the balance having a smooth brownish gray patina. The frame is crisp and exhibits the case color pattern very nicely. There are a few minor dings on both sides of the barrel lug around the wedge. With the exception of a moderate chip on the right heel, the grips are very good with some original finish remaining, a few scattered minor dings and scratches and overall a pleasant hand rubbed patina. The markings are crisp and clear. The cylinder scene is clear. The action is fine. These Open Tops are seldom encountered is fine condition and are absent in most collections. Most saw hard use and were shipped south of the border. 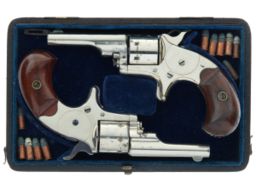 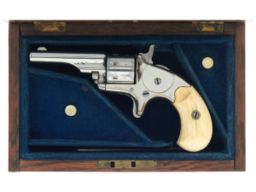 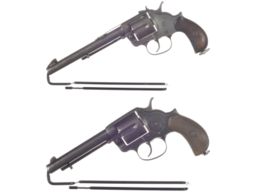 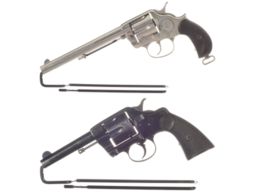 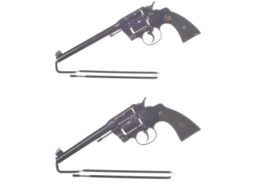 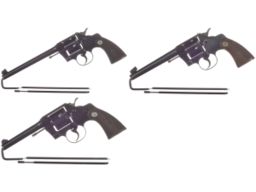