This is a rare early Winchester Model 1866 carbine that was manufactured in late 1866 that includes a hand written letter from George Midas (undated) that documents the various early features of the carbine. It has the following: (1) Henry and King patent dates on the barrel, (2) flat loading port cover, (3) two screw upper tang and (4) Henry style rear receiver profile. The barrel has the first style barrel band with integral front sight blade and early style, two-position hinged leaf rear sight marked "300" and "500" yards. It has the early first pattern threaded magazine tube end cap. The left side of the receiver has the original factory installed staple and saddle ring. It has the first pattern, long coarse borderless checkered hammer, that lacks a half-cock notch. The lever loop is the early small size. The carbine has a Henry style, crescent brass buttplate with pointed spur and brass trapdoor. The top of the barrel is roll-stamped with the first style legend: "HENRY'S PATENT-OCT. 16. 1860/KING'S PATENT-MARCH 29. 1866." in two lines between the lower barrel band and the rear sight. The lower left side of the tang is correctly stamped with a small assembly number (325) followed serial numbered (14484). Inside the cutout area for the upper tang the buttstock and lower end of the brass buttplate are both correctly stamped with the full matching serial number "14484". The buttplate is correctly fitted with a trapdoor for a cleaning rod (which is not included with this lot). The stock and forearm are straight grain American walnut. The barrel, magazine, barrel bands, and loading gate are blued. The hammer, lever and trigger are casehardened.

Very good overall with half of an old professionally rebrowned finish still remaining on the barrel and magazine tube. The receiver and side plates have a very nice aged mustard yellow patina. The stock and forend are both in very fine condition with a nice original dark brown matching color on both components with the "Henry bump" still visible. They both show only minor handling marks. Mechanically excellent. A really nice looking, high condition early first model Winchester 1866 saddle ring carbine with George Madis documentation. 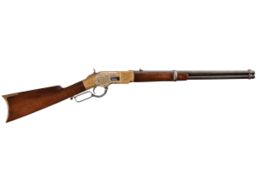 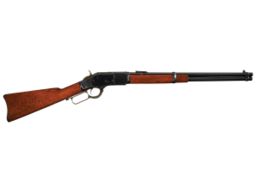 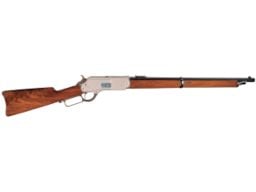 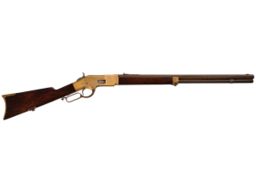 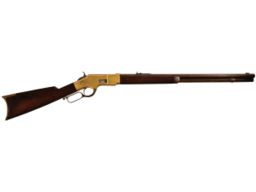 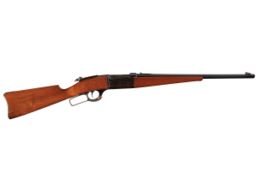