A desirable early production Japanese "Baby Nambu" Type B pistol with matching magazine. These rare Nambus were manufactured by the Tokyo Artillery Arsenal in Koishikawa, Tokyo circa 1903. Although never officially adopted, they were a private purchase weapon that was intended as a status symbol for high ranking Japanese Army and Naval officers. The chamber bears the four-intertwined cannon-balls of the Tokyo Artillery Arsenal, and the left side of the receiver is marked with Japanese characters that identify the model with serial number 1226 directly below that. The serial number is also visible on the underside of the bolt, the back side of the cocking knob and the back sides of both grips. It comes with its original nickel-plated magazine with an aluminum base that is correctly numbered "1226" on the spine of the magazine. It has an unnumbered striker and bolt lock and striker guide. The grips are finely checkered hardwood. Approximately 5,900 examples of the finely finished compact "Baby Nambu" pistol were manufactured by the Tokyo Arsenal before production ceased in 1927. The "Baby Nambu is the scarcest and most desirable Japanese semi-automatic pistol. These rare pistols have a rust blue finish with a bright polished "in the white" bolt with the straw colored trigger, magazine release, sear pivot pin and bolt lock.

Very fine as arsenal refurbished with 95% of the blue finish overall showing various spots of minor erosion or light pitting under the blue finish. The various other smaller parts retain 25% of their straw colors overall. The varnished grips are in fine condition with nice distinct checkering overall with light wear across the tops of the checkering with a light coat of extra varnish. 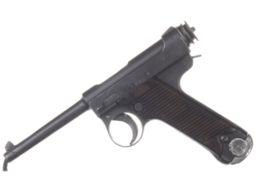 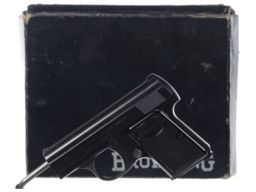 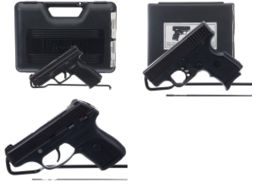 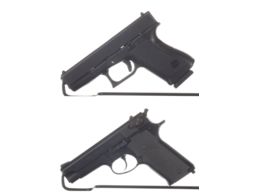 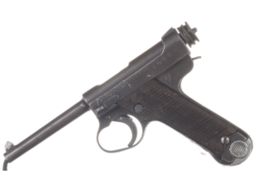 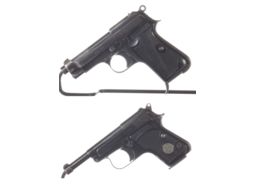