This rifle was shipped to "W.R.A. Company of New York, Inc." on December 1, 1915, in order number 749638 for display or exhibition; it was received in the warehouse the same day and was returned to the Winchester factory for repair on April 29, 1917, in order 100469 for factory exhibition embellishment and later presentation. Note the presentation gilt escutcheon engraved with the monogram "MCH" on the underside of the stock. The factory letter confirms the rifle's takedown configuration, the 22 inch long, extra light, nickel steel barrel; caliber, full magazine, checkered pistol grip stock, hard rubber shotgun buttplate, and oil finish and lists "Winchester High Velocity." This gun is pictured on page 155 of "Steel Canvas" by Wilson. The left side of the lower tang is marked "224" and "972." The right side of the lower tang is marked "782." The buttstock tang slot has been factory renumbered "782." An assembly number was always assigned by the factory. The tang and buttstock were renumbered during the factory rework. It has a takedown configuration with a 22 inch short rifle barrel chambered in desirable .45-70 caliber and featuring a beaded dovetailed Marble Sheard front sight and a two leaf rear sight (one folding marked "200 YDS", one fixed marked "100 YDS"). The left side of the barrel is marked with the two-line address/patent dates marking ahead of the rear sight and "45-70" at the breech. The Winchester factory oval proof is stamped on the barrel and receiver at the breech. The takedown release has the 1893 patent marking. The lower tang has the two-line patent date marking and serial number, and the upper tang has the three-line model/trademark information. The receiver features engraved scrollwork, gold inlaid game scenes and engraved and gold inlaid borders. These scenes are found in Winchester's "Highly Finished Arms." The left side of the receiver has two deer in a woodland scene, and the right side has a moose in a woodland scene. Among the scrollwork on the left side of the receiver is an engraved entwining diamond pattern. The gold inlaid borders and scrollwork extend to the barrel at the breech and muzzle, forend cap, hammer, bolt and lever. The highly figured forearm and pistol grip stock are finished in the factory D pattern featuring fine checkering accented with a carved oak leaf and acorn motif. The pistol grip has a hard rubber cap, and the buttstock is fitted with a hard rubber factory buttplate. Provenance: Carl Press Collection, The Collection of Robert M. Lee

Exceptionally fine. The rifle retains 95% of the factory blue/gold inlaid finish with the balance a smooth brown patina. The underside of the barrel has a filled dovetail slot for the attaching hardware meant for a full length magazine. The exceptionally fine wood shows some scattered minor handling marks and a series of shallow gouges in the overall crisp checkering. There is a missing minor chip on the buttplate near the toe. Mechanically excellent. Factory gold inlaid Winchesters rank amongst the most important, rare and seldom encountered of all 19th century American fine arms. Carpe diem! 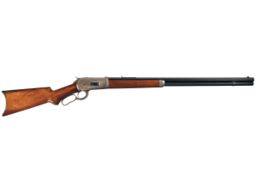 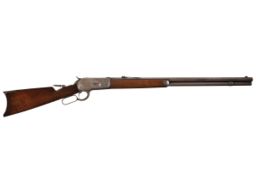 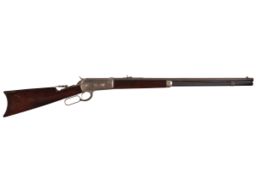 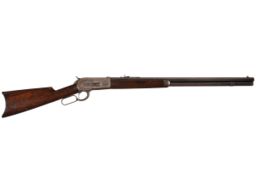 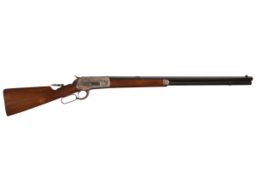 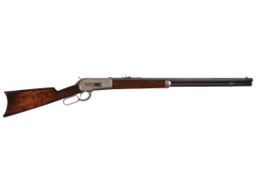