This is an exceptionally rare WWI era Cameron-Yaggi Trench Periscope sighting device that is fitted with an original WWI Springfield Armory Model 1903 bolt action rifle. This rifle and sighting device comes with a short document that states "this rifle and periscope design was originally in the Bill Brophy collection and currently is from the Bruce Canfield collection". Similar trench rifle designs are shown in the book "The 1903 Springfield Rifle" by Brophy," pgs 217-220. This specific device was originally developed as a join venture by J.L. Cameron and L.E. Yaggi towards the end of WWI to enable infantry men to fire at the enemy while still safely hunkered down inside a trench. This design actually raised the rifle (and its line of sight) approximately two feet up and over a trench parapet, and allowed the infantry man to load and fire the rifle via a mechanical manipulation of the bolt and trigger. For sighting the rifle, it was equipped with a non-magnifying elbow periscope/optical device, which is believed to have been specifically made for the Cameron-Yaggi. The rifle was fitted with a large steel bracket on the left side that has a dovetail in the middle which allowed this periscope to be attached. It was separate from the actual rifle sights. These rifles were also equipped with a 25-shot magazine that allowed the rifleman to remain in position for some time before reloading. This design still incorporated the standard leather sling so that the rifle (with the device still attached) to be carried on the infantryman shoulder. There were three different versions of "Trench Periscope" rifle devices developed during the later days of WWI; two different Cameron-Yaggi devices, the first model (as shown here) and a second later improved design and then a third model (that was completely different from the Cameron-Yaggi design), design by Guiberson. The Guiberson design used a specially designed Model 1903 stock that was "hinged" at the middle barrel band which used a set of reflecting mirrors to sight and fire the rifle. The rifle itself is a standard late WWI model that has the standard Springfield Armory receiver markings over serial number "856016" with a barrel marking of "SA/4-18/A". It has an all blue metal finish with an all blue straight handled bolt that is marked "J5" on the underside of the safety lug. It has its original front and rear sight set with the dished windage and elevation knobs. It is fitted with an original WWI straight grip "S" style stock with finger grooves on the sides and dual recoil bolts. It has the correct all milled components with a smooth face buttplate. The rifle has its original WWI combination blue metal finish with the oil-quenched casehardened receiver with the color casehardened cutoff and bolt components. There were only a handful of these experimental trench periscope/optical sighting devices (of all three types) ever manufactured with only "5" examples listed it the Springfield Armory museum records, however, this rifle and device was not one of them. Provenance: Bruce Canfield collection.

Fine with half of the faded blue finish remaining overall showing a thinning mixed gray/brown patina on the exposed metal surfaces. The revarnished stock and handguard are both good with numerous light pressure dents, nicks and dings overall from handling and use over the years. Mechanically very good. The Cameron-Yaggi trench device is extremely fine, totally original, retaining 90% of its black painted metal finish showing light wear on the edges and high spots and any area where the device is hand cycled or manipulated. The periscope scope has a few replacement parts including the small metal plate on the bottom of the tube and prisms. Per the consignor the scope was incomplete when it was obtained by Col. Brophy when he was employed by Marlin Firearms and the missing parts were fabricated at the Marlin machine shop. This is certainly a very rare and highly desirable device that is rarely encountered outside the Springfield Armory museum. This would certainly be the center piece of the most advanced 1903 Springfield collection or a WWI museum display. 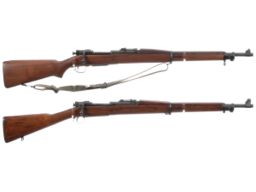 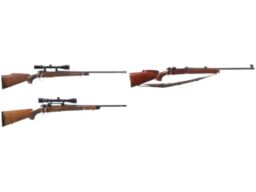 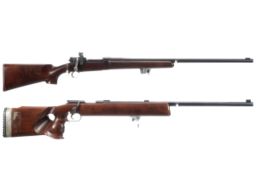 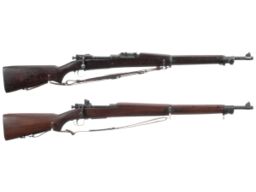 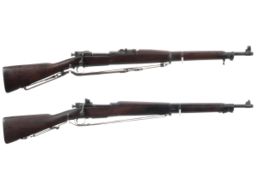 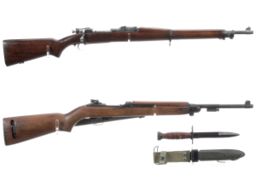