This is a very rare limited production French MAS 36, (CR 39 variant) folding stock paratrooper rifle. The design was produced in the early 1950 and was termed as the model "CR 39", and was used for only a very short time before being replaced by the FAMAS rifle. These were produced on a very short, limited basis and used a factory fitted, hollow, aluminum folding buttstock that was intended for use by French paratroopers and the French Foreign Legion. The rifle also features a slightly shorter barrel to make the rifle even more compact. This rifle is marked on the left side of the receiver, "MAS Mle 1936 C.R. 39" over the serial number "F30806". The aluminum trigger housing on the underside of the receiver formed the basis for the attachment point for the folding buttstock. There is a small lever on the left side with a locking latch on top of the front end of the stock at the rare of the receiver. The stock as noted is all hollow inside so that when it was folded it covered the sides and underside of the receiver and forend making it a very short 24 1/2 inch long overall. The sides of the buttstock were covered with a dark gray fiberglass covering. It still retains all its original serial numbered and matching parts to include the receiver, bolt, buttstock, trigger guard and aluminum attaching housing, floor plate and forend. The rifle has a hooded blade front sight and a standard tangent rear sight marked 2-11 (200-1100 meters). It was also fitted with a very unique sling assembly that has a single small sling swivel on the underside of the middle barrel band, with the rear attachment mechanism being a small circular brass piece that is attached "inside" the hollow buttstock. This rear brass attachment point allow the sling to be rolled up inside the buttstock so that the buttstock could be folded in the stowed position and then pulled out when the stock was opened and deployed. It also has its original 15 inch, fluted bayonet stowed on the underside of the barrel. This is a very rare example of an all original French MAS 36 Paratroopers rifle complete with its original leather sling.

Fine with 80% of a light gray parkerized arsenal type finish with edge and high spot wear overall with thinning on the underside of the receiver/floor plate area. The buttstock retains 90% plus of its original gray fiberglass covering showing light wear along the edges and upper comb area from use in the filed. There is a large "M" carved on the left side. The forend and handguard are both in very fine condition with a light beech color showing a few heavier gouges on the sides from use. This is a very rare example of a French MAS 36/CR39 Paratrooper rifle. 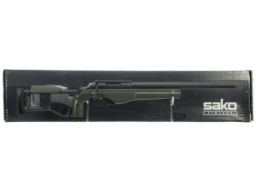 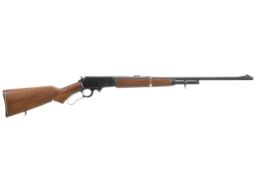 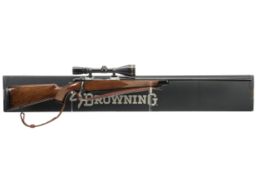 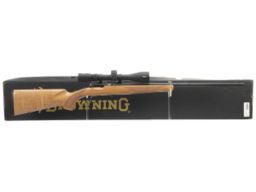 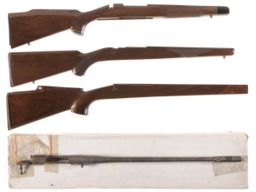 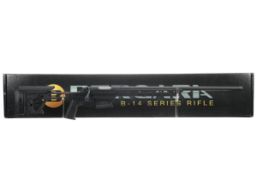