This is a very rare variant of the highly desirable Colt Model 1927 (AC) Thompson that was factory (Auto-Ordnance) modified to "Semi-Automatic" fire only. Originally these started out as a standard Colt Model 1921 fully automatic SMG firing the standard .45 ACP round. With all the interest in these weapons in the late 1920s, the Auto-Ordnance company decided to try and capitalize on their popularity by introducing a "semi-automatic" version available for sale to the general public or police that only wanted a semi-automatic weapon. There were actually less than 100-150 of the original semi-automatic models ever manufactured/converted by the factory and original unaltered examples are very rare. Although semi-automatic, they are still tracked/registered with their original (1921) serial number. There were two basic models: the 1927A model without the compensator and the 1927AC model (like this example) with the Cutts Compensator on the barrel. The standard receiver markings were milled out and remarked, and the internal components changed to semi-automatic fire only. The markings were changed as following: the left side of the receiver was originally marked: "MODEL OF 1921" which was milled off and restamped "MODEL OF 1927", with the old serial number "4706" below the marking block. The left rear portion of the receiver was originally "THOMPSON SUBMACHINE GUN" which has also ben milled off and restamped "THOMPSON SEMI-AUTOMATIC CARBINE". The remaining receiver markings all remained as follows: "CALIBRE .45 AUTOMATIC COLT CARTRIDGE/MANUFACTURED BY/COLT'S PATENT FIRE ARMS MFG. CO./HARTFORD, CONN. U.S.A." The right side markings were unaltered, showing the five lines of patent dates along with the two line "AUTO-ORDNANCE CORPORATION, NEW YORK U.S.A", and the top of the receiver is still marked with "THOMPSON" inside their "bullet" logo. The only other factory alteration was on the lower trigger housing where the word "FULL" was also milled off and left blank. Since these alterations were all performed by the factory on already brand new guns, they did not refinish them and instead just used touch up bluing to fill in the remarked areas. All other features of this rare carbine remain unchanged. It comes with one 20 round stick magazine. It has an interesting history in that it was owned/registered in 1968 by the Bob Steele Studios in Hollywood, Ca, later sold in 1980 from the Joe Miller Gun shop, Stroudsburg, Penn, and now from the Allan Cors collection.

Very fine with 85% of the faded blued finish overall with even honest blue wear and thinning on the metal surfaces mostly on the receiver. The wood components are all in fine condition with a nice original oil finish showing light handling marks and scratches on the sides in various areas. Mechanically excellent. NOTE: This item is restricted as a National Firearms Act (NFA), fully transferable Class 3, which is registered with the Bureau of Alcohol, Tobacco, Firearms and Explosives, (BATFE) that is classified as a "Curios or Relic" as defined in 27 CFR, 478.11. These weapons are still subject to the provisions of 18 U.S.C. Chapter 44 and 27 CFR part 478. 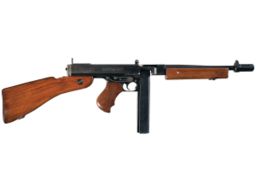 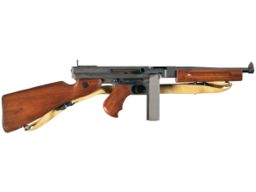 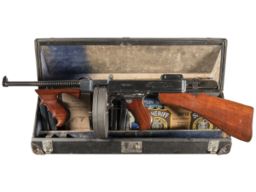 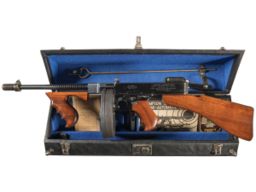 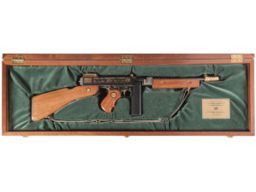 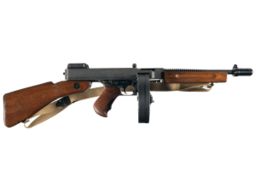