Colt manufactured around 100,000 of these Special Model 1861 rifle-muskets between 1861 and 1865 using surplus machinery from the Robbins & Lawrence Co. that had been originally used to produce Pattern 1853 rifle-muskets for the British during the Crimean War. They were manufactured under contract for the Union Army as well as state units and for the commercial market. The Colt Model 1861s used the same folding leaf rear sight as the Springfield Model 1861. The hammer, bolster, barrel bands and ramrod introduced on the Colt Model 1861 were subsequently utilized on the Springfield Model 1863. The trigger is casehardened, and the rear sight and nipple are blued; all of the remaining metal components are "national armory bright." The walnut stock has an oil finish. It has the standard markings and features and is dated "1863" on the lock and barrel. The stock has crisp "DAP" and "JT" cartouches on the left flat, "MMJ" on the comb, and a "K" behind the trigger guard. The socket bayonet is stamped "U.S."

Exceptional and nearly as issued overall with mostly "armory bright" polished surfaces, strong original blue on the rear sight, light patina and oil residue, some light buff marks, small amounts of pitting isolated to the buttplate, crisp edges on the stock, light handling and storage marks, some pressure marks on the butt, and crisp markings, including the cartouches. The bayonet is very good as re-polished with light pitting, faint marking, and light patina. Mechanically excellent. This is truly one of the finest Colt rifle-muskets extant and would be nearly impossible to improve upon. 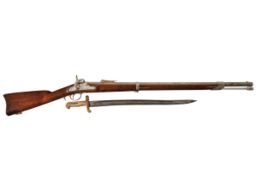 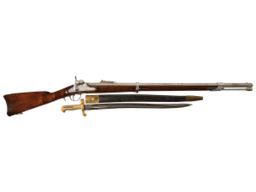 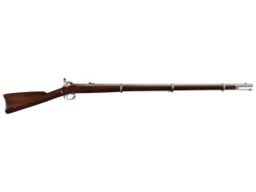 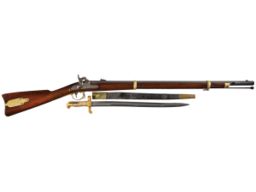 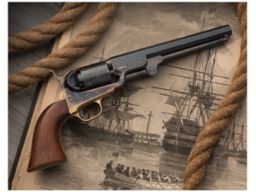 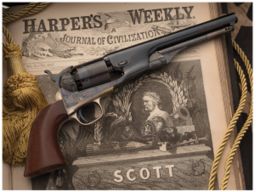