This is a scarce U.S. "Test" pistol that was manufactured for the U.S. 1907 military test trials and subsequently refurbished and sold by Tryon. Based on the poor performance of the Colt Model 1894 during the Philippine Insurrection, in January 1906 BG Crozier (Chief of Ordnance) issued a letter of invitation to the gun manufacturing industry to develop and submit a new semi-automatic handgun utilizing the then-new 45 ACP cartridge. Eighteen companies initially responded with only eight actually submitting a test sample pistol; Savage and Colt were the two finalists, with several designs being rejected and Mauser taking their 45 Luger and going home because they were convinced that the Americans were just using them to "prove" that they gave the European firms a fair shot. The final result of the testing was the approval of the Colt Model 1907, which would undergo a few rounds of revision and feedback to become the famous Model 1911 pistol. While the Savage design had virtues, particularly in magazine capacity, it was noted as not absorbing recoil as well as the Colt offering, and the design was passed on. Estimates on the total number of Model 1907 pistols varies in the 288-290 range, and many of those were destroyed or misplaced during the course of testing, and a large number of the survivors were returned to the factory to be stripped of their original markings and stamped with a new address, reducing the number of 1907s retaining the original government test configuration. Between the number destroyed from the stress of government testing, the number "lost" in transit, and the test survivors that were refinished and then dumped on the commercial market, good surviving examples are rare in any condition. Records show that Savage #46 was among the pistols issued to Troop I, 3d Cavalry for testing in New Mexico. This example is marked "CAL 45" ahead of the ejector port, with the "FIRE" and "SAFE" markings on the side of the frame. These markings were an addition requested by the Army partway through testing, being added to the pistols already made and being put on from the start on a new batch of 72 pistols made to replace a group of 1907s "lost" when the government returned them to the factory for the safety markings. The slide shows the signature heavy serrations towards the rear, with a ribbed hammer and smooth trigger. This example still retains the thin/narrow grip safety that is not integral to the rear of the frame and it has the improved Model 1909 markings of "FIRE" and "SAFE" at the rear of the frame, along with the wider checkered walnut grip panels. The pistol is numbered "46" on the underside of the slide and on the inside of the hold-open device. A swiveling lanyard loop is present. Magazine absent.

Fine, with 70% of the Tryon refurbished dull blue finish showing some areas of gray patina, bright edge wear, a small amount of pitting concentrated at the muzzle. The grips are good, with some dents and flat spots. Mechanically fine. 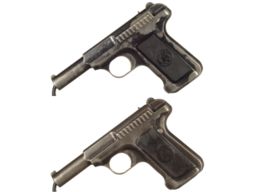 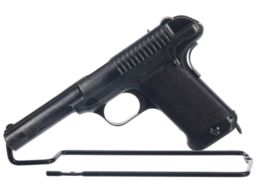 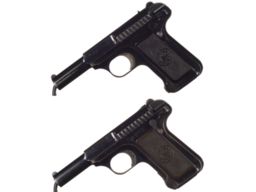 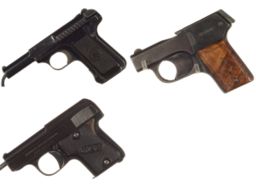 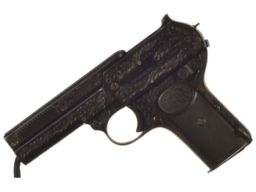 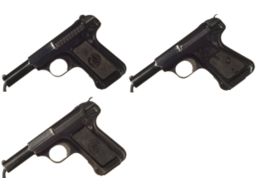