Very good as assembled with traces of the arsenal refurbished blued finish still remaining and even honest wear and blue finish loss on the exposed metal parts. The majority of the small parts are renumbered to match gun. The scope retains 60% blue black finish overall with the lens somewhat cloudy but viewable. The stock and handguard are also both in very good condition with handling marks, heavy pressure dents and dings overall on the sides and underside of the stock from use in the field. An interesting example of an early WWI sniper variation.

This is the standard WWI German GEW 98 rifle that has been fitted with an early Zeiss Bifocal reflex sight and a luminous-pointer front sight cover. The rifle itself was the standard WWI rifle used by German troops throughout the war. These sights used two separate over-lapping lens inside the scope with the lower/smaller lens having a slight magnification to the glass that acts as the aiming pointer. They were manufactured in the early part of WWI and were designed to be used in low light conditions. It also has the sheet metal front cover that has the large triangle pointer filled with luminous paint. The scope and front sight cover did not require any special scope mounts or fittings; instead, they both just clipped on to the front and rear sights, making them easily adaptable in the field. This arrangement was fairly short lived as they proved unsatisfactory and instead they started equipping these rifles with regular 3X sniper scopes. The top of the scope is marked "Carl Zeiss/JENA/Nr.4807," and a matching serial number and "2.5X" are on the rear ocular piece. The scope still retains its hard rubber eye piece. The receiver has the standard markings: "Crown/Spandau/1916" with the left side wall marked "GEW 98". The receiver has the standard Imperial Eagle firing proofs along with the factory crown/gothic letter acceptance proofs. The barrel is fitted with its original large lange rear sight graduated from 400-2000 meters along with a blade front sight and the noted luminous pointer front sight cover. It has its original full length stock and handguard and its correct WWI milled barrel bands, trigger guard and floor plate along with a cleaning rod. It has a blued metal finish and the bright polished bolt body and receiver. 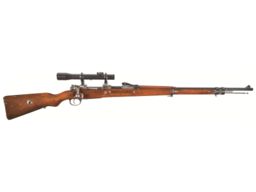 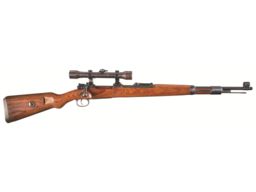 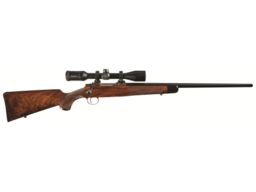 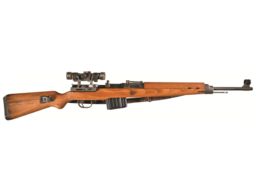 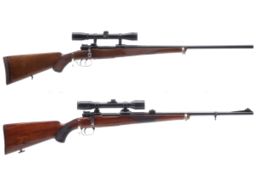 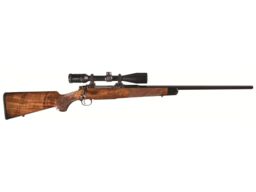