This is the finest known Colt U.S. Army contract Cavalry Model Single Action revolver manufactured in 1880 and inspected by Ordnance Department Inspector Lieutenant David A. Lyle and Sub-Inspector David F. Clark. The revolver is accompanied by a Colt factory letter that identifies this revolver as one of 150 Colt Single Action Army revolvers delivered to the U.S. government inspector at Colt on April 21, 1880. A Letter of Authentication from Colt Single Action expert John A. Kopec contains a detailed evaluation of the revolver. The Letter of Authentication states "the subject revolver is 100% authentic in every respect. There is no evidence that this revolver has ever been fired". The Kopec letter describes the finish of the revolver as "remarkable to behold" and states that "The color casehardening is 'as new'." and "The blue finish of this revolver can easily be described as being 99%+". The revolver has the low luster, Colt "Military Blue" finish on the barrel, ejector housing, cylinder, trigger guard and back strap. Feathered polishing marks are present on the barrel on either side of the front sight blade and above the ejector housing screw. The frame, hammer and loading gate are color casehardened with vivid case colors. The screws and trigger have a fiery, niter blue finish. The one-piece grip is oil-finished black walnut. The revolver has the early style bullseye ejector rod head and cavalry style hammer with elongated bordered knurling on the spur. The top of the barrel is roll-stamped with the address "COLT'S PT. F. A. MFG. Co. HARTFORD CT. U.S.A". The address is the same style used on Henry Nettleton-inspected Cavalry Model revolvers and has two lines under the "o" in "Co", a broken serif in the "T" in "PT", a broken "M" in "MFG" and a broken "A" in "HARTFORD". The underside of the barrel is stamped with a "P" proof mark and the Ordnance Sub-Inspector initials "D.F.C.". The left side of the frame is stamped with the Colt three-date/three-line patent markings and the "U.S." property mark. The "U.S." mark has square periods and raised areas around the letters where it was stamped into the casehardened frame. "D.F.C." is stamped on the bottom of the frame above the serial number. The assembly or batch number "3198" is stamped on the inside of the loading gate. A "P" proof mark and "D.F.C." Sub-Inspection mark are stamped on the cylinder behind the flutes. The full serial number is stamped on the bottom of the frame, trigger guard and back strap. The partial serial number, "5104" is stamped on the cylinder. The revolver was not disassembled to examine the partial serial number stamped on the barrel underneath the ejector housing. All of the visible serial numbers match. The left side of the grip is stamped with the date of inspection "1880" above the final inspection mark which consists of the script initials "DAL" with an oval border. The right side of the grip is stamped with the Ordnance Sub-Inspector's mark which consists of the script initials "DFC" enclosed in a rectangle with rounded ends. The small "D.F.C." Sub-Inspector's mark is stamped on the left grip heel. The Kopec letter states that this revolver was a new listing in his survey of Colt Single Action revolvers and that the closest identified Cavalry Model Single Action in this serial number range is serial number 55923 which was identified as belonging to Company F, 6th Cavalry regiment on August 3, 1888. The Kopec letter states that this revolver probably was unissued and remained in arsenal storage, until it was sold to a private individual in the 1920s.

Near new. The revolver remains in un-issued and un-fired condition with 99% plus blue and color casehardened finish. The barrel and ejector housing have no edge or holster wear and show only a few very minute storage marks. The cylinder has a faint drag line between the stops and some light finish wear in the cylinder stops themselves but otherwise retains nearly 99% of the original military blue finish. There is some very minor storage wear on edges of the trigger guard; otherwise the trigger guard, grip strap and back strap are near new. The vivid case colors on the frame, loading gate and hammer are exceptional. All of the screws retain 99% of the bright niter blue finish and are free from screwdriver marks. The trigger and exposed portion of the cylinder pin retain 99% of the un-faded niter blue finish. All of the markings and serial numbers on the barrel, frame and cylinder are exceptionally sharp. The grip is in the same exceptional condition as the rest of the revolver. The oil-finished walnut grip has raised feathered grain near the junction of the frame and trigger guard and shows only a few, very minor storage marks on the sides and edges of the heels. The Inspection date and Ordnance Final Inspection and Sub-Inspection marks are in perfect condition with sharp un-handled edges. This is the finest U.S. Colt Single Action Cavalry Model revolver ever offered for sale by the Rock Island Auction Company and probably the finest David F. Clark Sub-Inspected Cavalry Single Action revolver extant. This revolver would be the stand-out piece in any collection of Colt revolvers or U.S. martial arms. It is an extraordinary example of a U.S. Army Colt Single Action Cavalry revolver which can at best be equaled, but not improved upon. 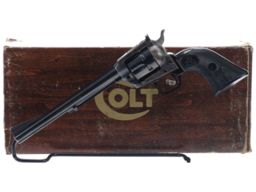 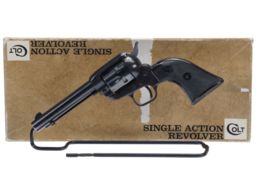 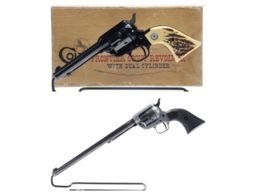 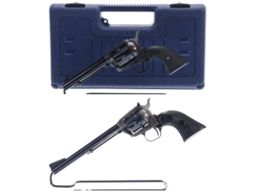 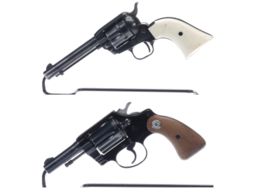 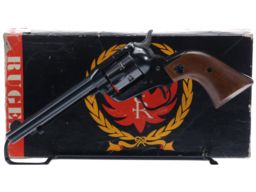