Manufactured after 1906. The rifle features a Marlin factory No. 3 engraving consisting of scrollwork on a punch dot background, bordering and a game scene depicting a buck and doe in an oval panel on the receiver. The scrollwork extends to the forend cap and takedown collar. The breech end of the barrel has a simple scroll engraved pattern. When this rifle was manufactured, Alden George Ulrich was engraving for Marlin. He apprenticed under his father, Conrad F. Ulrich Jr., and worked for Marlin from 1905 until 1919 when he joined Winchester. Dovetail beaded blade front and elevation adjustable rear sights on a barrel with the two-line address/patent dates marking and caliber designation. The top of the receiver is factory tapped for sight mounting and correctly lacks the "MARLIN SAFETY" marking, which was omitted on later production rifles such as this one. The upper tang is marked "Marlin/MODEL '94." The forearm and pistol grip stock are bird's eye maple and feature stylized fleur-de-lis No. C checkering, which was reserved for extra selected pistol grip stocks. The buttstock is fitted with a Marlin hard rubber buttplate. Bird's eye maple stocks are a rarely seen special order Marlin feature. 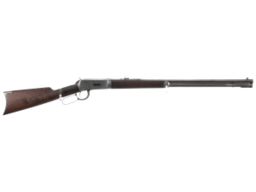 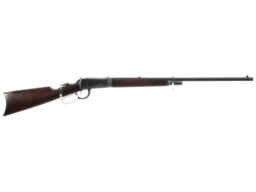 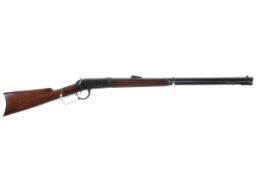 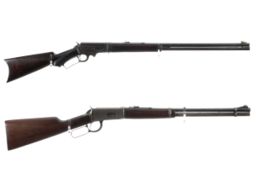 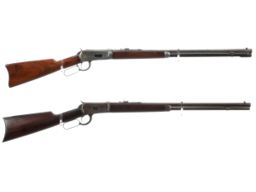 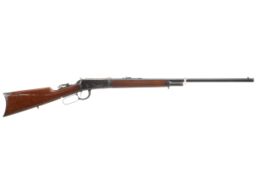