One of the final weapons designed and developed by the Nazis as an effort late in World War II, the VK-98 was one of the "People's Weapons", last-ditch small arms produced by an industrial complex surrounded on all sides while being destroyed by Allied strategic bombers. Manufactured using on-hand receivers, at heart, the VK98 can be viewed as the "bare minimum" version of the Mauser 98k, discarding all nicety of finish, eliminating many components as possible to simplify the rifle, and recycling parts from other weapons to further trim down the production time. Mainly associated with the Volkssturm (People's Storm/Assault, a militia force consisting of anyone who vaguely resembled an able-bodied fighting-age man if you were wearing welding goggles and in a profound state of desperation-fueled denial), the VK-98 and other People's Weapons represent the final death throes of Nazi Germany, and when put side by side with their earlier counterparts excellently demonstrate just how far the situation had degenerated. Relatively few made it to the States due to the variety of "prettier" weapons to be had by trophy hunters and the relative abundance of 98Ks to be had by GIs looking for a sporter, making them scarce on the modern market. This example uses a Steyr 98 receiver and bolt assembly as a base, with dovetailed blade front and fixed notch rear sights, a barrel originally meant for a machine gun, completely enclosed magazine, and a roughly finished hardwood "plank" stock with a brown leather sling and a naked buttplate.

Very fine, showing 85% of the original mixed gray phosphate finish overall, with some scattered mild spotting and handling marks. The stock is good, with a few openings in the grain and mild dings and dents. Some cracking is visible on the leather, which remains supple. Mechanically excellent. 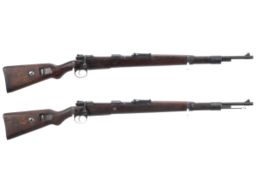 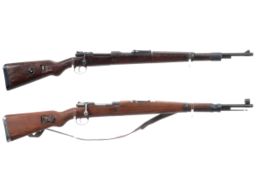 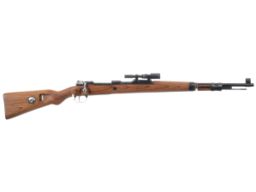 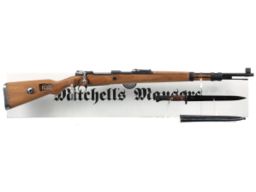 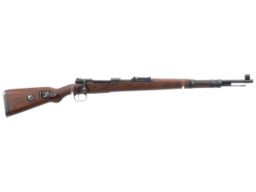 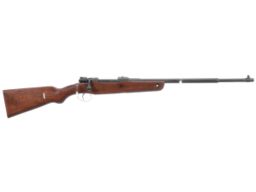