This deluxe rifle was manufactured in 1888 and is fitted with a presentation plaque on the left side of the butt inscribed "PRESENTED TO/J.C. COTTAM/by his Friend/L. WEBSTER FOX/1889." It features a Beach type combination blade and globe front sight, adjustable sporting rear sight, tang mounted peep sight, the two-line address and patent markings on top of the octagon barrel, "45-85-285" to the left of the rear sight (essentially an "improved" loading of the .45-70), multi-point checkering on the slide handle and pistol grip stock, and steel rifle buttplate. Lawrence Webster Fox (1852-1931), commonly listed as Dr. L. Webster Fox, was one of the leading ophthalmic surgeons and professors in the late 19th century and early 20th century. In 1889, he was working at the Germantown Hospital in Pennsylvania and that September married Beatrice Bickerton of Liverpool, England. He was adopted by the Blackfeet as "Chief Eagle" thanks to his work performing corrective surgeries for trachoma which saved hundreds from blindness. On March 29, 1891, the Philadelphia Inquirer reported "Dr. and Mrs. L. Webster Fox have been entertaining J.G. Hyde and J.C. Cottam of London." It appears the recipient of the rifle was John Charles Cottam, an English "financial adventurer" and "company promoter" in the 1880s and 1890s known to have made much of his money by selling the inflated stocks of companies he promoted through false advertising. The other man, John George Hyde, was also an English investor and promoter and was the illustrator of a book published in 1880 about the American Southwest designed to influence English investment. How Cottam became associated with Fox is not clear; they may have become friends and business associates while Fox was studying in England. English newspapers indicate Cottam was in legal trouble for his schemes in 1889. He went bankrupt in 1894.

Fine with 50% plus original blue finish, patches of mild oxidation and pitting, and moderate overall wear. The wood is fine and has some scrapes in the otherwise crisp checkering, minor flakes at some of the edges, most of the original glossy varnish remaining on the buttstock, and mild scratches and dings. Mechanically excellent. Overall, this is a very nice and interesting "Express Model" Colt Lightning rifle. It would have been an excellent addition to an Englishman's kit if he was headed out for some adventures in the West in the late 19th century. 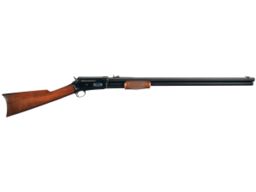 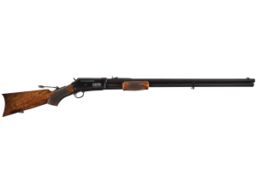 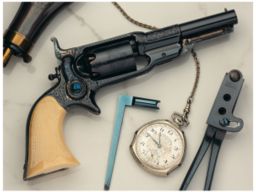 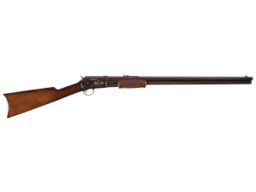 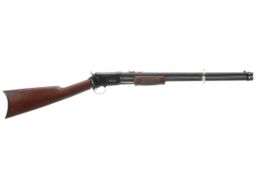 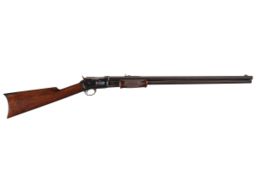