Developed for possible sale to the Austrian Army, the 1893 Gas Trap Revolver never left the prototype stages, with less than 100 believed manufactured in total. A novel design, the 1893 uses a spring-loaded movable cylinder that is automatically pressed forward during the firing cycle to enclose and engage the breech of the barrel and seal the cylinder to the breech. The gas gap between the cylinder and barrel is an issue endemic to revolving weapons, and most designers were willing to treat it as a necessary evil; the most famous design to confront the problem head-on was the Russian/Soviet Nagant Model 1895. An assortment of documentation is included, starting with a November 5, 1945 dated capture certificate puts "1 Pistol, Waffebfabrk(sic) 5 (German) Cal. 8mm" as the captured war trophy of T/5 Robert W. Belschwender. Belschwender enlisted in the U.S. Army in June of 1944, and spent the war as an enlisted man with the 564th Field Artillery Battalion, a component of the 71st Infantry Division. Originally formed up as a jungle fighting unit for the Pacific, the 71st instead went to Europe, achieving the distinction of making it the furthest East of any American outfit before V-E Day, having made it from Northern France clear into Austria. While the unit broke up shortly after the war, Belschwender transferred to the 2nd Special Service Company to finish out his time overseas, and his Army career continued on to 1964, when he retired at the rank of Chief Warrant Officer (W3), with stints in Japan, the 7th U.S. Army, and Tank Automotive Command. In civilian life he wrote an autobiography, "From Whence Came You" (included), and on page 67 is the following: "In the town of Steyr, Austria which was the farthest east any U.S. soldier had penetrated during the war, a huge weapons manufacturer was located. "Steyr Waffen Fabrik" was one of the largest weapons factories in the world. We managed to loot or a better term, "liberate" weapons and I have one of these weapons and have kept it for the past 50 years. As a matter of interest, my weapon has Serial No. 5 and was manufacturer(sic) in 1897. Quite a bounty." Clearly, Belschwender was an expert at understatement. Also included with the grouping are 5 service time photographs of Belschwender, a map illustrating the path the 71st took through Europe, data on the weapon itself, and 1990s vintage correspondence between Belschwender and other parties, including an exchange with Steyr-Mannlicher, where he sought more info on the revolver. Steyr, having lost their records in the war, were unable to provide any hard data, but could verify that it was a very close match to an example retained in the factory museum, and was too rare to price. The exterior is marked "5" on the left side of the barrel and the frame, with "WAFFENFABRIK/STEYR" on the left side plate, an the internals show the "5" on the interior of the frame, the rear of the side plate and on the backs of the grip panels. A fine golden straw finish is present on a number of components, including the hammer and cylinder assembly, with a niter blue lanyard ring on the butt and checkered hardwood grips.

Excellent, with 98% of the original blue finish, showing some light spotting and handling marks overall. The straw finished components retain nearly all of the bright, original golden color overall, with a small amount of wear and spotting, and the excellent grips are crisply checkered with mild dings. Mechanically excellent. A very scarce martial weapon in a condition that would be hard to beat. 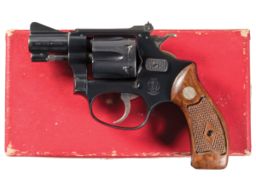 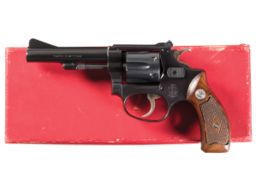 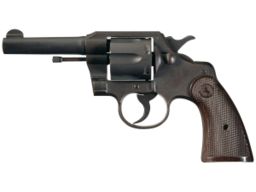 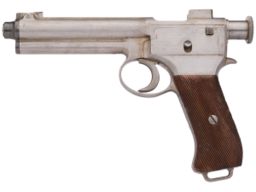 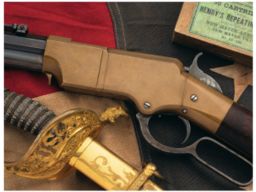 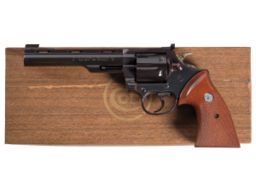