This is an absolutely outstanding cased pair of exhibition quality percussion pistols extensively inlaid with relief chiseled gold in incredibly artistic elaborate designs covering nearly all of the metal surfaces complimented by equally intricate raised relief carving on the stocks. The pair are both marked in relief gold as follows on the top flat of the octagon barrels "Donne’ par le ROI des Francais a Mr. le Capitaine COCHRAN. 1843.” In English: "Given by the KING of France to Mr (Monsieur). Captain COCHRAN. 1843". The barrels also have small signature "MANCEAUX” in gold on the upper left flats and "A PARIS" on the upper right flats. The latter marking is executed in platinum to contrast with the former markings and the extensive florals and other designs are executed in gold. The gold inlays include two superbly rendered relief dragons on each lock, relief crowned lions on the forend caps, relief crowned demonic style faces on the trigger guards and various floral and scroll patterns all in pure gold. The designs have textured backgrounds. These extraordinary pistols ordered by the King of France from the royal workshop at Tulle headed by Jules Manceaux, the armory’s finest gunsmith, exhibit the very finest quality throughout testifying to King Louis Philippe’s regard for his old friend, Captain Cochrane, an extraordinary figure second only to Horatio Nelson in the pantheon of English naval heroes. The Louis Philippe/Lord Cochrane Manceaux pistols differ from all other similar gold decorated pistols being actually inlaid with gold. Nearly all other sets known by Devisme, Gastinne Renette, LePage, and others are etched and then thinly damascened with gold amalgam. The King’s presentation pistols are decorated with true gold inlay. The barrels feature post and notch sights, spurred trigger guards, and superbly carved highly figured European walnut stocks with coordinating floral pattern with intertwined heads and flutes. The case is a work of art in its own right with gold and silver designs on the exterior including a heavy raised relief cast and chased silver presentation plaque bearing the same inscription as appears on the barrels except in two lines and all capital letters. The interior has some pressed designs on the velvet lining along with gold motifs and "MANCEAUX./A PARIS." Inside the case is a cleaning rod, ram rod, wooden mallet, round wooden container with two additional percussion nipples, ball puller, a wrench with gold collar, a gold embellished bullet mold, and a gold inlaid powder flask. The designs on the latter three accessories match the designs on the pistols. Captain Cochrane is known as the real Master and Commander. His exploits are so remarkable as to be beyond belief. Cochrane was the British naval officer who proposed saturation bombing and chemical warfare during the Napoleonic Wars. In 1818 following a false conviction after connection with the London Stock Exchange Scandal of 1814 Cochrane left England and became a fantastically successful mercenary admiral for Chile, Peru, Brazil, and Greece. He was pardoned in 1832 by King William IV and inherited the title Earl of Dundonald. In 1798 the Duke of Orleans (later King Louis Philippe) and his brothers the Duke de Montpensier, and Count Beaujolais were fleeing the terrors of the French Revolution aboard a small and uncomfortable American vessel. Captain Cochrane invited the French royals to enjoy the relative comfort of His Majesty’s frigate. While attempting to board the much larger frigate the Duke of Orleans lost his grip and plunged into the sea. The Duke swam to the stern and a boat was lowered “Which rescued him from his unwelcome bath”. On the 31st of March 1798 Captain Cochrane landed the three French royals in Havana harbor. The future King and the Captain remained friends and undoubtedly after Lord Cochrane was pardoned these magnificent pistols were ordered by King Louis Philippe as a token of esteem.

Excellent. The pistols retains 98% plus of their original gold inlays which remain pristine and crisp with their relief features intact. The background is “French Gray" in most areas and the few non-embellished surfaces are mostly bright metal. The exceptional stocks have some slight pressure marks and a few slight scratches but is otherwise near new. The actions function flawlessly. The pistols have almost certainly never been fired and likely handled very little over their 172 year lives thus far. The case has some minor hairline cracks on the exterior but is otherwise in very fine condition with minor storage type wear and some pressure marks and fading on the interior. The Accessories are very fine overall.

As discussed in A.

It is clear that this set has been well cared for and exchanged hands very few times since it was originally presented by King Louis-Philippe to Captain Cochrane. They are simply one of the most splendid Royal presentation sets known in or out of a museum and it is doubtful whether an opportunity to purchase a pair of such quality with an equally important history will come along for many years. 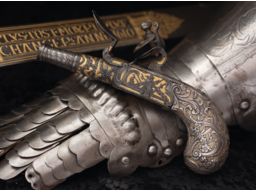 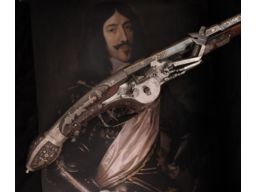 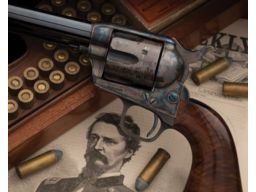 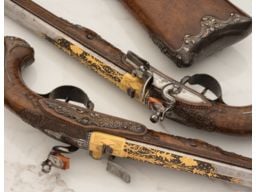 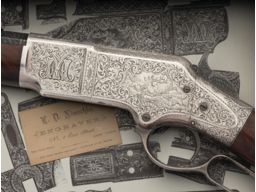 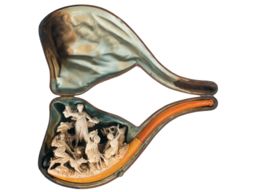