This Model 1911A1 semi-automatic pistol was manufactured by the Singer Manufacturing Co., in November 1941. In April 1940, the Ordnance Department awarded Singer Educational Order No. W-ORD-396 to manufacture 500 Model 1911A1 pistols along with appropriate machinery for mass production of the pistols. Singer completed the order in November-December 1941 and the 500 Singer M1911A1 pistols were shipped to Springfield Armory. Most of the Singer M1911A1 pistols were issued to the Army Air Corps. Although Singer was awarded a contract for 15,000 additional M1911A1 pistols, it was determined that Singer's manufacture of M5 and M6 Fire Control Directors was a better utilization of Singer's facilities. The 15,000 pistol order was transferred to Colt. The 500 M1911A1 pistols manufactured by Singer in 1941 are the rarest and most desirable variation of the M1911A1 pistol. The pistol slide and frame have the high polish Du-Lite blue finish that distinguishes Singer M1911A1 pistols from other World War II contract M1911A1 pistols. The left side of the slide is roll-stamped with the two-line legend: "S. MFG. CO./ELIZABETH, N.J.,U.S.A.". The right side of the frame is roll-stamped: "UNITED STATES PROPERTY" above the serial number: "NoS800071" behind the slide stop hole. "M 1911 A1 U.S.ARMY" is roll-stamped on the right side of the frame in front of the slide stop hole. "P" proof marks are stamped on the left side of the frame above the magazine release button and on the top of the slide (facing the left). The "JKC" Ordnance Inspector's mark is stamped on the left side of the frame below the slide stop cut-out. The mainspring housing has the fine checkering found on Singer mainspring housings. The trigger is the short style with milled face and Du-Lite finish. The short wide spur hammer has fine border-less knurling on the spur and polished Du-Lite finish. The 1924 style slide stop and safety lock are checkered and have the Singer Du-Lite finish. The barrel bushing and recoil spring plug have a Du-Lite finish. The receiver feed ramp is polished bright. The barrel is a replacement with High Standard (HS) markings on the right side of the lug. The brown plastic, checkered stocks are Keyes Fibre Co., replacements with reinforcing rings around the screw holes, interior strengthening ribs and "K/Star" markings on the insides. The replacement full blue, flat bottom magazine has an "S" (Scoville Mfg. Co.") on the top of the floorplate lip. The pistol is accompanied by a World War I magazine pouch that contains one "R" marked, blued, flat-base replacement magazine, a World War II pistol belt and a russet leather M1911 holster that has been modified by cutting off the top flat and removing the brass finial.

Fine. The pistol shows moderate handling wear consistent with a firearm that saw front line service and retains 60% of the distinctive original Singer blued finish. The slide has much of the finish with moderate-heavy holster wear along the upper and lower edges of the sides and across the top at the muzzle. There is finish loss around the edges of the ejection port, on the top of the front and rear sight and on the rear edges of the slide. The proof mark and Singer legend are sharp. The frame shows more wear than the slide and has 40% of the Du-Lite blue. Most of the finish is missing from the grip strap and adjacent edges of the frame, bottom of the trigger guard and the main spring housing. The surfaces of the worn components have a mottled, gray-brown patina. The bottom of the frame and edges of the trigger guard show holster wear. The sides of the trigger show cycling wear. The finish on the rear of the safety lock has flaked and shows some surface rust. The serial numbers, property mark, proof and Ordnance inspection mark are crisp. The grips are in the same general condition as the other components and show moderate wear. The barrel retains 80% of the blued finish. The barrel and grips are replacements. The replacement magazines are in very good condition. The pistol belt and magazine pouch are in very good overall condition. The heavily modified, incomplete holster is poor. Fine example of a rare Singer Manufacturing Co. M1911A1 that shows moderate service wear. Singer M1911A1 pistols are extremely desirable in any condition and this example would be a key piece in the most advanced collection of U.S. military firearms. 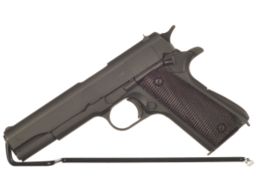 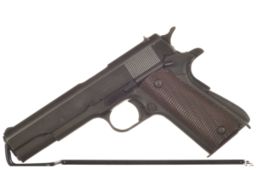 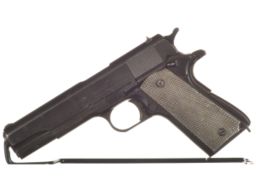 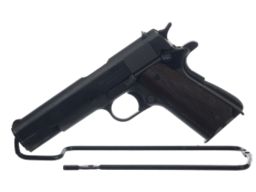 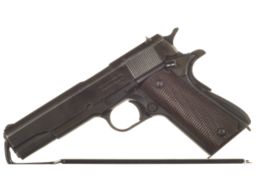 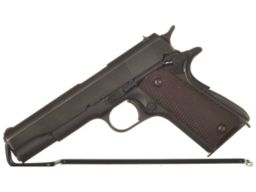