Granville Stuart (1834-1918) was one of the most influential figures in Montana's frontier history, and this classic "Sheriffs Model" is documented as the revolver he concealed carried daily from the mid-1880s until his death as a direct result of his work as the leader of the vigilante group "Stuart's Stranglers." His band of vigilantes, backed by the DHS ranch and other Montana stockmen, hunted down and ended the lives of upwards of 63 men believed to have been involved in horse theft and cattle rustling. Approximately fifteen "Stranglers" killed between 18 and 24 suspected outlaws in July and August 1884 alone. Territorial Governor John Schuyler Crosby wrote that the situation and lack of government protection for the stockmen required "some application of hemp and lead during the year by the ‘cowboys,’ as or stock-herders are called." Their activities were given further government approval and support by the election of Samuel T. Hauser as territorial governor. Hauser was Stuart’s friend and business partner (the "H" in the DHS ranch). Governor Hauser placed Stuart as president of a new board of livestock commissioners, and some of the men hired as inspectors and detectives by Stuart and the board were former members of the Stranglers. Granville’s younger brother Tom was also installed as the territorial veterinarian surgeon despite no formal training. Though their violence had received a veneer of legal protection, Stuart and his vigilantes were still at risk of reprisals. While some of the men they had killed were found in possession of contraband horses and cowhides with brands indicating they had come from stolen animals and others opened fire when confronted, some of the men they killed may have been innocent or merely lesser associates of the real criminals. Regardless of their guilt or innocence, their deaths at the hands of Stuart and his men understandably created hard feelings with their surviving friends and relatives. Stuart was warned in early June of 1885 by Sheriff Thomas Irvine of Miles City that some men were talking about killing him. As noted in an included letter, Granville wrote back, "Thanks for the friendly warning. I knew those chaps were talking about killing me but didn’t take it to heart worth a cent. . .but perhaps I had as well get me a short D.A. 41 Cal. Colt and keep it about my clothes in future." Being so specific about the type of gun and caliber might seem odd in a personal letter, but Stuart was often very specific when writing about firearms in his correspondence. He was an avid shooter and lover of fine firearms and wanted very specific configurations for his guns as can be seen by the number of firearms both within this collection and the copies of letters by Stuart discussing or ordering firearms. An included factory letter indicated the records for this revolver were unfortunately lost or destroyed, but the serial number dates to 1881 per Colt. The included affidavit from Stuart's daughter Mary Stuart Abbott identifies this revolver by serial number and features and states: "I personally remember him carrying this gun with him at all times. When Granville Stuart passed away the gun was sent to me with the rest of his articles. My husband, E.C. Abbot, the famed 'Teddy Blue' later used this above mentioned Colt revolver and also carried it with him at all times. He had a special vest with shoulder holster made for convenience in carrying it. English born Edward Charles "Teddy Blue" Abbott (1860-1939) worked for Granville Stuart at the DHS Ranch in Montana and married Mary Stuart on September 29, 1889. Like Stuart, he knew the artist Charles Marion Russell well. His memoir, "We Pointed Them North: Recollections of a Cowpuncher," inspired the award winning novel "Lonesome Dove." The revolver has a rounded blade front sight, the proper two-line address on top of the barrel as is proper for a short barreled Model 1877, "COLT D.A. 41" in an etched panel on the left side, an "S" on the bottom at the breech, a cylinder pin with knurled head, the three-line patent markings on the left side of the frame, "41 CAL" on the left side of the trigger guard, matching serial numbers including "4" and "8" on the back of the cylinder between the chambers, and checkered hard rubber grips with the Rampant Colt trademark on top, matching partial serial number inside the right panel, and "TA" (Teddy Abbott?) inside the left panel. The included handcuffs are also documented as owned and used by Stuart in an included affidavit written and signed by his daughter Mary. She indicates the key was handmade after Stuart lost the original. The cuffs have "PAT. NOV. 1. '87." on one side of the body. The revolver was part of the famous Montana and western arms collection of John Fox and is pictured and discussed along with a selection of other Granville Stuart items in multiple publications including: "The Peacemakers: Arms and Adventure in the American West" by R.L. Wilson (p. 224) and "The Story of the Winchester 1 of 1,000 and 1 of 100 Rifles" by Edmund E. Lewis (p. 37). The former notes "The Colt Model 1877 was regularly carried by Granville." It was also offered for sale by Norm Flayderman in his 61st catalog along with Stuart's One of One Thousand Winchester Model 1873 from lot 42.

Very fine, especially for a revolver carried for decades in the West. The scars that it exhibits is a valuable part of its history and part of what connects it to Granville Stuart himself and gives it life. The revolver retains 90% original nickel plating, legible etched panel, and 60% plus original niter blue on the small parts and exhibits mild oxidation on the sides of the hammer and moderate handling wear. The grips are very good and have heavy handling and rub wear appropriate for a revolver concealed carried for an extended period of time including distinct rubbing on the Rampant Colt on the left and attractive aged chocolate tones overall. The revolver functions in single action, but needs mechanical work like many Model 1877s that saw real period use. The handcuffs are in matching condition and have mild scratches and marks from carrying and use. This is an incredible pair of personal effects documented as owned and used by legendary Montana pioneer Granville Stuart. This was the revolver his daughter recalled him carrying with him daily after the famous Stuart's Strangler raids in the mid-1880s, and is the weapon he trusted with his life when it was on the line. The fact that it continued to see regular use by his son-in-law, the famous "Teddy Blue," after his death is very fitting. Stuart passed down his firearms with the intent that they be used. This revolver and the handcuffs will certainly add tremendous value to any antique American arms or western collection. How could you hope to improve on Mr. Montana's personal six-shooter? Provenance: The John Fox Collection. 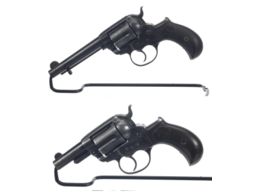 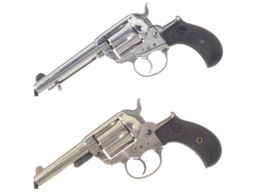 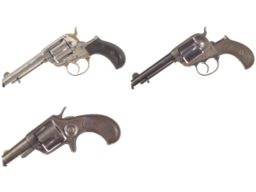 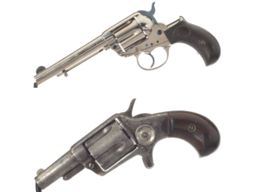 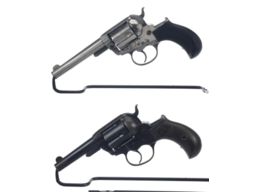 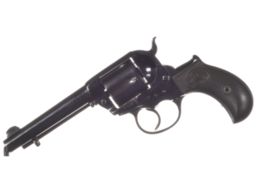