This revolver is extensively discussed in Kopec and Fenn’s “Cavalry & Artillery Revolvers…a Continuing Study” on pages 34-36. At the time of its publication in 1994, “Serial #189 is the third lowest extant U.S. Cavalry revolver known.” Although bearing an early production three digit serial number, the revolver must “be considered a late shipment example.” For an unknown reason, the revolver failed to pass the initial military inspection in 1873, and the “components were ‘set aside’” until they were resubmitted for inspection 1875, as it bears this production period principal sub-inspectors A.P. Casey’s “C” and W.W. Johnson’s “W” markings. "J" is on the cylinder. "C" is on the trigger guard and barrel. Although all numbers are matching, the later production barrel and cylinder were re-numbered at the time of final assembly at Colt in 1875. The barrel features the “aging script-style address” with four broken dies that does not appear until the 17300 serial number range. The cylinder has the improved locking notches with enlarged bolt guides. Kopec and Fenn summarized it best, "Why this revolver was not assembled in 1873 along with numbers 179 and 182 is not known. It was set aside only to be revived some two years later, fitted with a new re-numbered barrel and cylinder, then submitted and passed by the U.S. ordnance inspector." The left side of the frame has the two-line patent date markings followed by a faint "US". The accompanying John Kopec letter of authentication reiterates the information presented in the book while adding that the barrel “has been lengthened from a previously shortened condition” and the mainspring is a replacement. Comes with a Kopec autographed copy of “Cavalry & Artillery Revolvers” with the special salutation, “Sept 25, 1994/First day of publication-/To Ralph W. McGrew,/the owner of the Colt Cavalry revolver #189- With my appreciation for your contribution to this book.”

Very good, retaining traces of faded original blue finish and slight traces of original case colors, otherwise the revolver has an attractive smooth brown patina. The restored barrel has been professionally lengthened to original length (see above). The grip is also very good with worn high edges, a couple chips near the butt and some minor dings and scratches. Mechanically excellent. One of the earliest known U.S. Colt Cavalry Model revolvers with one of the most unusual factory production/U.S. inspector stories. A must have for the serious Colt or U.S. military collector. 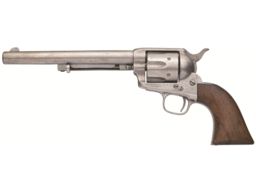 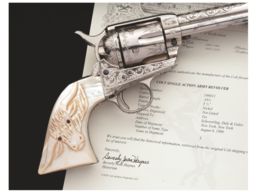 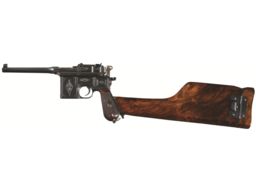 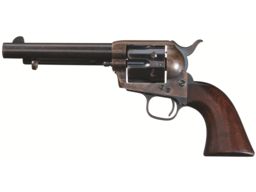 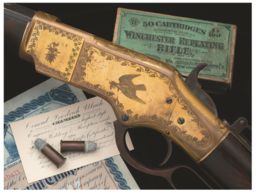 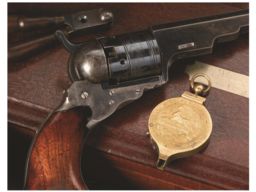