The consignor indicated this highly detailed model was manufactured "for presentation to Czar of Russia," which would have been Nicholas I, "with an offer of contract to build four full-size cannons for Russian army tests." The documents list the inventor as Wurttemberg Major Ritter von Brecht who wanted to sell this design to the Russian government and the translation of von Brecht's description of the design addressed to the Imperial Russian Headquarters at Adrianople on November 9, 1829, notes "The model is made to an exact nine times reduced scale of a 12 pound cannon which caliber, I assume to be the lightest gun ever produced for this [gauge] artillery by means of my improvements." He goes on to discuss various aspects of the design of both the cannon and carriage and notes "These new and important inventions for Artillery, I have until now kept secret. Indeed I intended to surrender such a secret only to one of the foremost rank in the state." Adrianople had been captured by Russian forces under German born officer Hans Karl von Diebitsch on August 22, 1829, and the Treaty of Adrianople had just been signed on September 14th, 1829. Also includes a Los Angeles Museum ascension document from 1934 listing it as a "Model of needle fire cannon invented in 1829 by Mr. von Brecht's great-grandfather" along with a 1999 appraisal and other documents. The iron two stage barrel has a brass sleeve cut with shallow non-fouling rifling over most of its length and a tapering rounded forward section with raised turned muzzle ring bearing a front sight and the octagonal breech section signed "WÜRTTEMBERG. [upper left] F.A.T.A. v. BRECHT[top] 1829 [upper right]." The barrel is fitted to a sprung recoil absorbing bed comprised of a wood frame with iron rails and reinforcing plates. It also has functional geared elevation and windage mechanisms. The cannon is centrally mounted within an elaborate wood carriage with further shaped iron reinforcing plates. The framework encloses the large spoked and iron bound artillery wheels. The front of the carriage has a smaller guide wheel of similar form to the main wheels and has three iron mounted shafts. The wood frame has black painted highlights and details. The whole design is meant to create more agile artillery than what was currently in use. The use of a "needle fire" mechanism in 1829 is particularly of note given Johann Nikolaus von Dreyse had not completed his needle gun until 1836.

Fine overall with dark patina on the iron, clear engraved markings, some age related marks and staining on the wood, one nut absent from the frame, and the breech plug replaced. 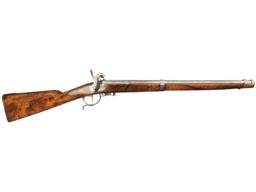 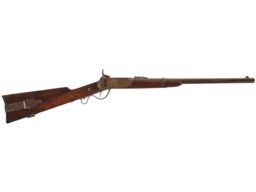 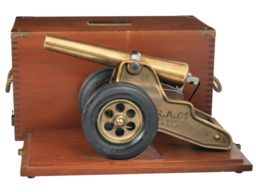 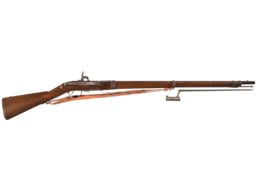 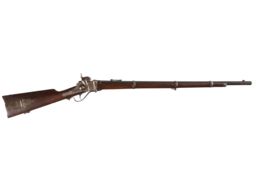 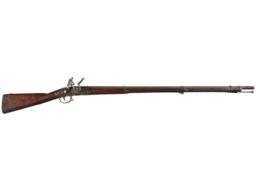