Manufactured in in 1914, the third year of production for the commercial Government Model. This pistol represented the cutting edge of firearm technology and was highly sought after by military personnel and civilians alike. This particular example could be considered what is sometimes called a "Commercial Issue", which were ordered by military officers who couldn't wait to be issued a Model 1911 by the military, as it was shipped to a colonel, though he wasn't active in the military at the time. This pistol was individually shipped to Colonel William C. Skinner (1855-1922), who became a colonel while serving on the staff of the 54th governor of Connecticut who was in office from 1889 to 1893. In 1906, Skinner was elected to serve as vice president of Colt's Manufacturing Company, and three years later was elected president of the company, where he served until 1911. In 1916 Skinner returned to the company as president, serving until 1921 when he resigned to serve as the head of the board of directors. Skinner is credited with anticipating the end of World War I and implementing a diversification program at Colt which kept the company in business even with the lack of large military contracts. It is possible that Skinner requested these pistols for presentation to friends or high ranking officials as there are at least three others listed shipped to him between serial number 1 and this pistol. It is also possible that he retained this pistol for himself, and in the previous lot is a pistol that he specifically ordered and had inscribed for his son. This specific pistol is listed by serial number on p. 256 of "The Government Models: The Development of the Colt Model 1911" by Goddard as being shipped on 12 September 1914 to "Col. W.C. Skinner". The slide on this pistol bears the two-line, two-block address and patent markings on the left side of the slide with the Rampant Colt behind the serrations. The right of the slide has the caliber markings. "VP" and "R" are on the trigger guard, and "GOVERNMENT MODEL" is on the right side of the frame. The early four-digit serial number is located on the right of the frame. The later production replacement barrel has a polished chamber and "P" proof on top, visible in the ejector port of the slide. Fitted with a set of diamond pattern checkered grips and an unmarked two-tone magazine with lanyard loop on the bottom.

Excellent, retains 90% of the bright original high polish blue finish with the balance having thinned to mostly a smooth grey patina, which is most evident on the mainspring housing and on high spots. The grips are also excellent with very minimal handling evidence and crisp checkering. Mechanically excellent. Do not miss this opportunity to add a early Government Model to your collection that was shipped to the president of Colt and was at the helm of the company through a pivotal time in their history! 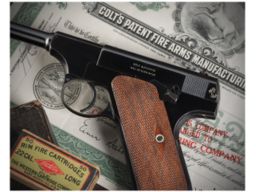 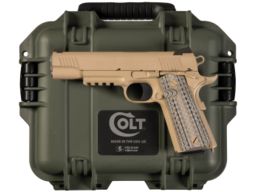 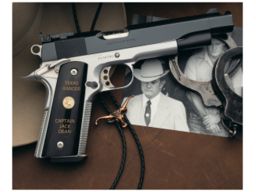 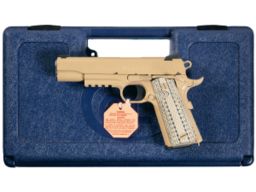 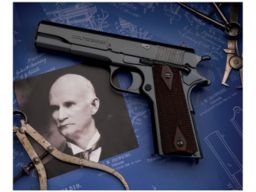