This is an outstanding and scarce variation of a World War II era U.S. Model 1911A1 pistol that was manufactured by the Singer Manufacturing Company, who previously had become a global leader in the manufacture of sewing machines. Singer Model 1911A1 pistols certainly need very little introduction, and their desirability in the 1911 and 1911A1 collectors market is unmatched. There were only 500 of these extremely rare pistols produced as part of Educational Order No. W-ORD-396 awarded April 17, 1940. The pistols were to be produced alongside a set of gauges, jigs, fixtures, machines, patterns and other equipment necessary for mass production. The total cost of the educational order amounted to $278,875.67, or about $538 per pistol, a princely sum for 1940, and the equivalent of approximately $9,945 per pistol today. However, much of this cost would be recuperated by the government as the extremely valuable production equipment made by Singer would immediately become government property upon completion of their contracts. Most of this equipment would later be utilized by Remington-Rand. In June of 1941, Singer was awarded a larger order for 15,000 pistols, a contract which would never be fulfilled. They completed the initial order for 500 in December of 1941, which were then shipped to Springfield Armory for distribution. Shortly after that, it became clear to Singer and the government that their specific talents of manufacture could be far better utilized elsewhere. For the remainder of the war, the company would be manufacturing more intricate materials such as the M5 Artillery Fire Control Directors. It is reported that almost all of the 500 pistols that were produced were issued to the Army Air Corps in various theatres early in World War II. Some are even reported to have been issued to Army Airmen stationed at Hickam Field in Hawaii on 5 December, just two days before it was "suddenly and deliberately attacked by naval and air forces of the Empire of Japan." Given the terribly high casualty rates amongst the Army Air Corps early in the war, especially amongst bomber crews fighting the Luftwaffe in Europe, it is clear that far fewer than 500 of these pistols survived in any condition, let alone the exceptional condition this one is in. The left of the slide on this example has the standard "S. MFG. CO./ELIZABETH, N.J.,U.S.A." address, the right is unmarked, and there is a "P" proof on top just in front of the rear sight. The right side of the frame has the "JKC" inspection mark of Colonel John K. Clement, which is found on all government accepted Singer manufactured pistols as well as the production equipment, as well as another "P" proof. The barrel is the correct original "P" inspected variant. The right side has the standard U.S. property markings, "S" prefixed serial number, and "M 1911 A1 U.S. ARMY" marking. It is fitted with blade and notch sights, stamped trigger, long grip safety, checkered wide hammer, checkered slide stop, magazine release, and thumb safety; arched checkered mainspring housing with lanyard loop, checkered Keyes Fiber grips, and an "R" marked, non-factory replacement, full blued magazine. These Singer 1911A1 pistols have truly become the "holy grail" of 1911 and 1911A1 collecting for a variety of reasons. Their quality of manufacture is without question, even surpassing that of some of the best Colt manufactured automatics, and certainly being the finest of the World War II production 1911A1 pistols. There is the fact that these pistols were issued and carried by young men of "the greatest generation", many of whom were flying high over Europe and the Pacific, and many of whom never returned home. And finally, that they are a palpable piece of the awakening of American industrial might, and an enduring symbol of this country's ability to adapt and overcome. If the Singer sewing machine company could drop everything and make a weapon as fine as this, then there was nothing we couldn't overcome. Provenance: The Dr. Robert Azar Collection

Excellent, retains 90% plus of the original high polish blue finish with some scattered light handling marks and some patches of edge and high spot wear, primarily in the form of holster type wear. The grips are also excellent with a few scattered light handling marks and crisp checkering overall. Mechanically excellent. Do not miss this opportunity to add the "holy grail" of 1911 and 1911A1 collecting to your collection! 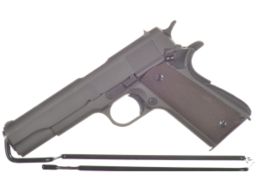 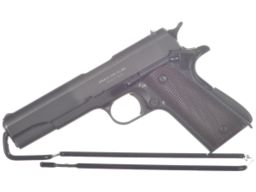 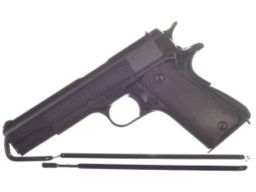 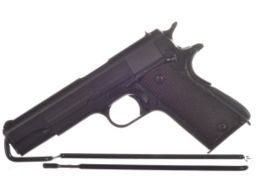 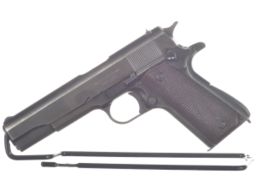 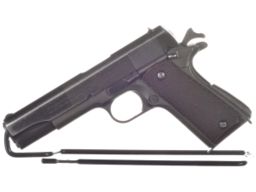