Pre-war manufactured with "crown/N" proof on the right side of the frame, slide and muzzle, fixed sights and a "SuS" monogram on the left grip panel. Included with the pistol is a brown leather holster with two cursive signatures "Carl Röver" inside and outside, and a signed and dated statement from Jim Cate, author of noted texts "J.P. Sauer & Sohn" Volumes I and II, which identifies this pistol by serial number as formerly of his own private collection along with documentation and matched original cursive signatures from German archives linking this pistol and holster as a bring back originally belonging to the World War II German Military Party Leader Carl Röver (Gauleiter, second highest Party paramilitary rank). After purchasing this pistol from a local pawn shop, Jim Cate tracked down the family who pawned it and met the sister of the U.S. soldier (unnamed), a fluent German speaker, who brought it back with him in 1945. Jim Cate states "Once the U.S. Military discovered he could speak and write German fluently, he was sent to England...attached to a British 'communications' team which went into Germany in 1944.". In the included documents is an interesting excerpt about Carl Röver from "Leaders and Personalities of the Third Reich" by Charles Hamilton, which states "On the night of May 13, 1942, Röver startled the party hierarchy when he announced that he was going to see the Fürher on the next day and then proceeded to meet Winston Churchill, in order to make peace. Coming virtually on the anniversary of Rudolf Hess' flight to Scotland, the matter was immediately brought to [Party Official] Martin Bormann's attention. An SS physician diagnosed the last stages of syphilis in Röver, and he was rushed to an isolated area. Two agents were sent by Bormann to examine Röver, and they reported on May 15 that the sick man had succumbed to heart failure. The whole matter was hushed up and soon forgotten in the course of the war." In Jim Cates included article about this pistol published in "Auto Mag", he states "The most interesting question is, 'Why did Carl Röver, an old-timer in the Party, prefer a Sauer to the accepted Party pistol...the Walther PPK?' I doubt if we ever know the answer, but if you had been a Gauleiter I'm Sure you could have used ANY pistol you wanted to." Photos also included in documentation showing Carl Röver standing next to Hitler. 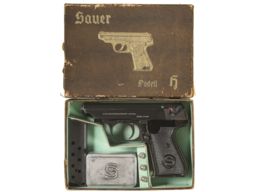 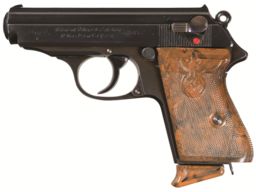 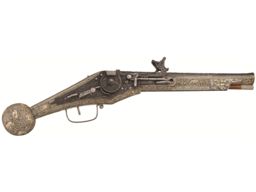 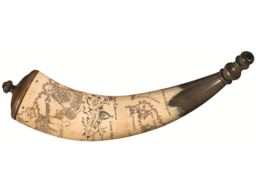 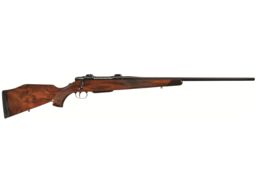 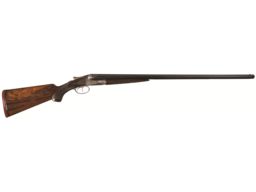