Approximately 20 of these Model 1900 Mark II Gatling guns are reported to have been issued to the U.S. Navy, making this one of the rarest Gatling gun models extant. Features ten fully enclosed rotating barrels, a muzzle cover that conceals the top half of the barrels, a cone front sight and adjustable 2,000 yard rear sight, Bruce feed magazine system, and a right side mounted safety knob. The Mark II has the ability to attach the crank handle to either the gear-reduced side shaft or directly to the rear of the barrel-unit axle for an even higher rate of fire. Although the "recommended" rate of fire was 600 rounds per minute, the direct drive method of operation could easily surpass that. “U.S.N./F.H.S.(Naval anchor)CAL..30/MARK II/No. 46. 266. Lbs./1901” marked on top of the breech ahead of the cartridge hopper, “GATLING GUN PATENTED/Manufactured by/Colt’s Pt. F. A. Mfg. Co./HARTFORD, CONN. U.S.A.” marked on top of the breech casing behind the cartridge hopper. “20” marked underneath the frame of the gun, on the feed cover, and on the ejector. All the bolts are correctly numbered “1” through “10” on top with all but three of them bearing an “R.A.C.” (Rinaldo A. Carr) inspection mark on the rear lug, and all are marked with various assembly numbers on the top rear and rear flat surfaces. Small single letter naval inspection stars are marked on the left yoke latch, on top of the feed cover, underneath the frame of the gun, and on the brass oval plaque of the carriage. “No. 51” marked on top of the right yoke latch and “51” marked inside. “52” marked inside the left yoke latch and on the top left surface of the yoke itself. “15” marked on the front of the yoke. The base of the carriage is wearing an oval brass plaque on the front marked “Manufactured By/Colt’s Pat. Fire Arms M’f’g. Co./Hartford, Conn. U.S.A./No. 49 J.A.B./(naval inspection triangle)”. The correct lightweight wheeled Navy carriage is fitted with two ammunition boxes (absent retaining pieces for the lids) and a hand bar at the tail for transportation.

Exceptionally fine, highly attractive genuine golden aged patina on the brass, scattered light to moderate pitting on the iron components, and crisp markings. Mechanically excellent. Carriage is very fine, scattered light scratches in the wood, some light scattered light chips in the paint, the left side yoke latch hook is cracked/absent, a few securing pins for the boxes are absent, and the carriage is sturdy overall. This highly attractive example of a U.S. Navy Mark II Model 1900, one of the rarest variations of Gatling guns, would display very well in any U.S. Military collection. 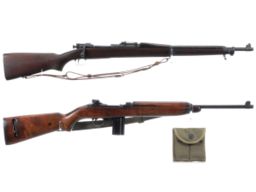 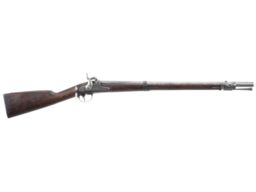 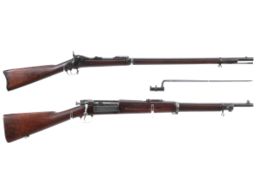 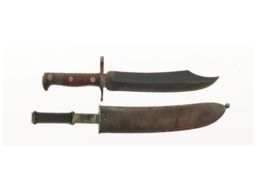 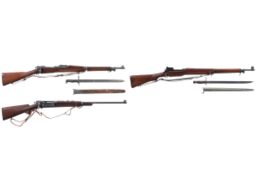 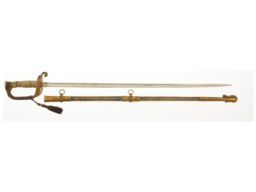