This revolver was manufactured in 1876, the same year the World's Fair was held in the United States for the first time in celebration of the centennial of the Declaration of Independence and the founding of the Unite States. Fittingly, the Centennial Exposition was held it Philadelphia. The fair presented a tremendous advertising opportunity for American arms companies like Colt and Winchester. Both displayed elaborate exhibition arms and took in orders, including for high end deluxe arms. Colt's famous display was perhaps the factory’s most spectacular display in its history, and Colt's smaller pocket revolvers were highly represented given they were just the type of firearms suited to those living in and visiting the bustling late 19th century cities. This revolver is listed by serial number on the Oct. 15, 1877, ledger listing revolvers received by Henry Folsom & Co. from and returned to Colt that were previously part of Colt's famous "wheel" display at the 1876 Philadelphia Centennial Exposition (copy of list included). The display was built in Hartford specifically for the exposition and received a lot of attention both at the World's Fair itself and into the 21st century as collectors eagerly seek out the historic Colts that made up Colt's most famous display. It is shown in multiple publications about Colt firearms, including Wilson's books (for example, see page 172 of "Colt: An American Legend." The "wheel" revolvers were later loaned to the Henry Folsom Co. of St. Louis and were returned to Colt in October 1877. Some remain in the Colt Collection at the Museum of Connecticut History. The engraving was probably executed by Cuno Helfricht and consists of punch-dot backed intertwining vine scroll and floral engraving along with checkerboard patterns and diamond pattern accents. It has the standard blade and groove sights. The barrel is marked "COLT'S PT. F. A. MFG. CO./HARTFORD, CT. U. S. A." The bottom of the grip frame is marked "41 CAL." Matching serial numbers are on the bottom of the barrel, rear of the cylinder, and left side of the grip frame. The latter also has a "P" marking. The grips are pearl. The case has purple velour lining, a cleaning rod, and cartridge block holding 25 rounds of ammunition. Provenance: Colt's display at the 1876 Centennial Exposition in Philadelphia, Henry Folsom & Co., Colt Patent Fire Arms Mfg. Co., and Dr. Robert G. Cox.

Exceptionally fine with 85% plus original nickel plating, 50% plus original gold plating, bright original niter blue on most of the screws, crisp engraving and markings, bent front sight, minor dings and scratches, and mild overall wear. The grips are also fine and have tiny flakes at the junction with the frame and otherwise minor handling wear and attractive iridescent colors. Mechanically excellent. The otherwise fine case has a split in the lid and moderate overall wear. This is both a rare and highly desirable piece of Colt history. Very few collectors get the opportunity to own a Colt revolver featured in the famous "Wheel." 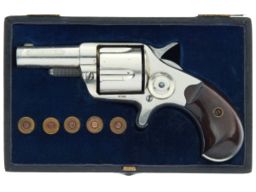 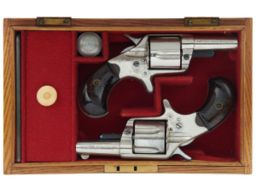 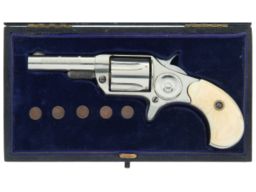 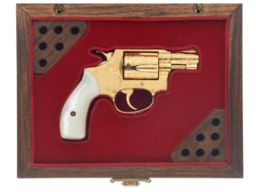 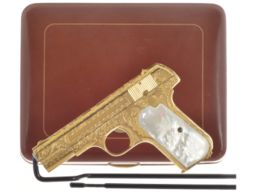 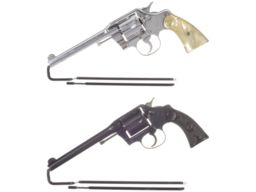