Approximately 1,501 Type I Model 1858 Cadet rifle-muskets with the early long range rear sight were manufactured at Springfield Armory in 1858, and 1,000 of the Type II variation with the later flip-up rear sight were manufactured in 1860. The Model 1858 Cadet is nearly identical to the standard issue Model 1855 rifle-musket, and only differs in having a two inch shorter barrel with a slightly shortened stock, as requested for use by the West Point Military Academy. The Type I Model 1858 Cadet rifle-musket is described on pages 278-281 of George D. Moller's book "American Military Shoulder Arms, Volume III", with this exact rifle photographed on page 279. It has standard markings and early features including an 1858 dated lock and barrel, and early brass end cap. Left stock flat marked with circled script "JS" (John Symington) and "ESA" (Erskine S. Allin) cartouches. A small "X" is carved on the right rear of the stock. "GDM" (George D. Moller) collection initials marked at the toe of the stock. Includes a US socket bayonet, leather sling, and brass tipped wood tampion. Provenance: The George Moller Collection

Fine, retaining mostly bright surfaces with some light pitting concentrated towards the muzzle end, a few patches of light pitting near the top of the rear band, markings on the barrel and lock are light but fully legible, and sharp markings on the lock. Stock is fine overall with defined edges, numerous handling and storage marks, and crisp cartouches. Mechanically excellent. Included bayonet is excellent. This is a fine example of a rarely encountered Model 1858 Cadet rifle-musket that would make a fine addition to any collection. 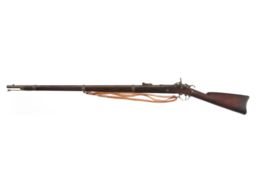 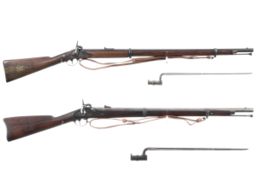 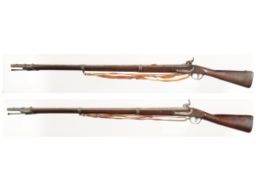 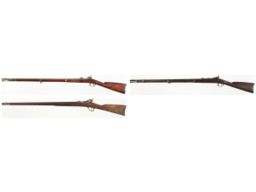 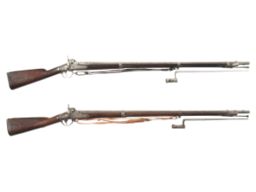 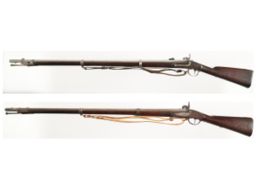