Louis-François Devisme (active around 1833-1886) is well-known for creating a variety of innovative and often unusual firearms. His revolvers were among the earliest centerfire revolvers and are very robust. Known Devisme clientèle include high level Confederate generals and politicians like Robert E. Lee and Jefferson Davis, French Emperor Napoleon III, Queen Victoria, King Luis I of Portugal, and other European nobility, and high end Devisme arms are part of some of the finest private and public collections in the world including in the Metropolitan Museum of Art. These early cartridge revolvers were manufactured from the very end of the 1850s to the 1870s. This revolver has a dovetailed round blade front sight, "Devisme a Paris" in script on top of the barrel, a "crown/AF" indicating production by August Francotte on the right side of the frame lug, "97" and a circled "B" on the bottom of the frame, a full fluted cylinder with "3" on the rear face, a solid raised piece on the top of the breech face at the rear of the top strap (apparently missed being notched for a rear sight), "17621" marked on the breech face, "C" on the left side below the recoil shield, checkered ebony grips, and a lanyard ring on the butt. Includes a hardwood case fitted for the revolver with "AE" in Gothic script inscribed on the lid escutcheon, "DEVISME/A PARIS" in gold on the violet velvet lining, a cleaning rod, and a screwdriver. Provenance: The Dr. Gerald Klaz Collection

Fine with bright metal surfaces, minor spots of staining/light pitting, and general light wear overall. The grips are very fine and have crisp checkering and light handling marks. Mechanically excellent. The case is very good and has light age and storage related wear. 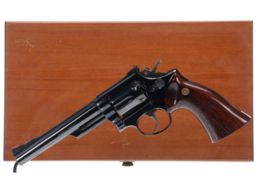 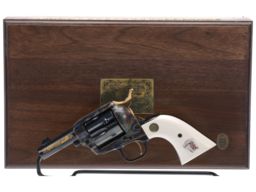 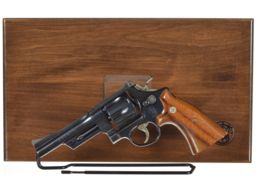 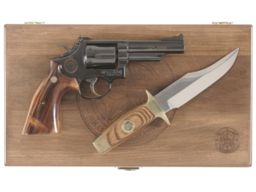 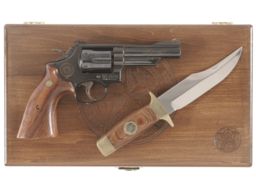 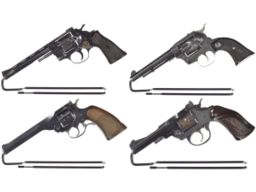