Manufactured in 1906, this is one of only 6,210 Colt "Military Model of 1905" pistols manufactured over a period of six years. These pistols are a very important evolutionary step in the development of Colt automatic pistols and the Model 1911 as they were the first production Colt automatic chambered for the legendary .45 ACP cartridge. This pistol, serial number 596, was manufactured shortly before Colt began fabricating two model room examples of the Model 1905 which would later be submitted to the 1907 U.S. military pistol trials. The left side of the slide is marked with the two-line two-block patent dates and address, with the circled Rampant Colt behind the serrations. The left side of the slide is marked "AUTOMATIC COLT/CALIBRE 45 RIMLESS SMOKELESS". The left side of the frame is marked with the serial number along with the non-factory marking "291", and the left of the trigger guard has a "VP" proof and "W". It has rounded blade front and rounded top notch rear sights, and the rounded checkered hammer. It is fitted with a pair of diamond pattern checkered grips and an unmarked full blue magazine. Provenance: The Gus Cargile Collection

Fine, retains 60% plus of the high polish factory refinished bright blue with the balance mostly a plum brown patina, primarily on high spots, with light handling marks scattered throughout. The grips are very fine with some scattered minor dings and scratches and mostly crisp checkering. Mechanically excellent. 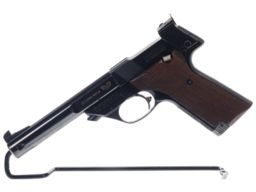 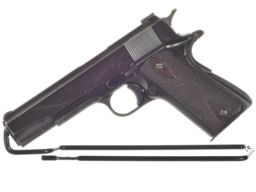 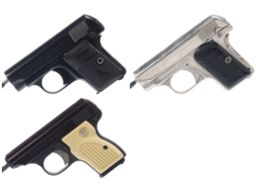 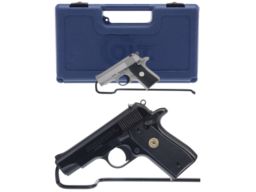 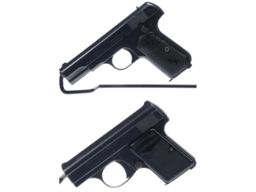 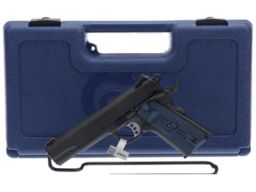