A martial variant of a John Browning designed sporting gun, the 520 Trench Gun was originally developed in response to a WWI request for new fighting shotguns for the American Expeditionary Force. It made a strong impression on the evaluators but did not make it into the field before the armistice was signed. Seeing potential for the gun on the police market, Stevens kept production going to 1932, and at the outbreak of World War II, the U.S. government bought every 520 that was still in the warehouse. Checked back into the arsenals at the end of the war, many were sent back into the field for Korea and Vietnam. A combination bayonet lug and 6-hole heat shield is mounted on this example. It has a two-line gauge marking on the left side of the barrel, the three-line address on the opposite, "P/(ordnance bomb)" proofs, cylinder choke and a 2 3/4 inch chamber, along with a matching serial number on the left side of the breech. The frame is marked "P/(ordnance bomb)", "MOD. 520-30" and "U.S." and has the post-1920 upper tang safety switch and the locking block in the top of the frame. Smooth metal jacketed forearm and pistol grip stock with a serrated plastic buttplate and a 13 3/4 inch length of pull.

Fine, with 70% of the mixed, partially original blue finish, with a mixed touched up artificial brown on the receiver and gray patina on the bayonet lug and magazine tube, scattered spotting and mild handling marks overall. The forearm shows some light dings and dents, and the refinished buttstock shows some chipping and filler around the wrist, a few cracks and chips at the buttplate, and light sanding. Mechanically excellent. 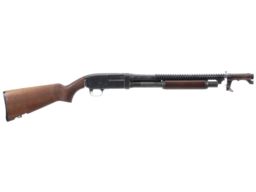 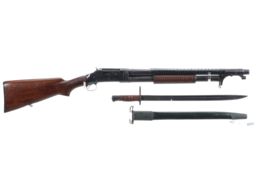 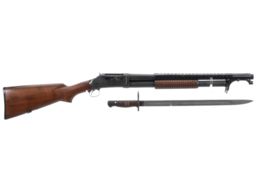 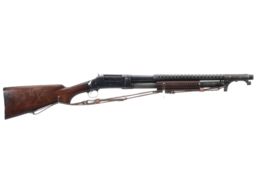 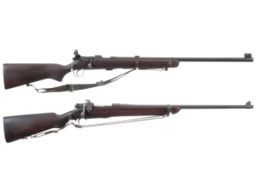 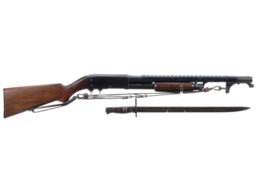