Manufactured in 1900, this is a rare example of one of only 100 Colt Model 1900 pistols manufactured to fulfill the first contract for the U.S. army. These initial 100 pistols were ordered by the Ordnance Department to test the feasibility of an automatic pistol in the hands of army officers. Later, a further 200 Model 1900 pistols were ordered, at least partially due to the high demand by officers stationed in the Philippines for automatic pistols. These initial 100 pistols were serial numbered 11, 12, 59, 60, 87-132, 133-157, and 183-207. Pistols 87-132, including this example were shipped to Springfield Armory on 16 May 1900. These pistols were inspected by Captain John T. Thompson, whose cartouche can normally be found on the left grip with "1900" above it, as pictured on p. 25 of "U.S. Military Automatic Pistols 1894-1920" by Meadows. Only the corner of the boxed cartouche remains on this example. Following their shipment to Springfield Armory, 50 of these pistols were sent to the Philippines, 25 to Cuba, and 25 to Puerto Rico, where they were issued to officers who were expected to test their merits and provide feedback. Overall, the reports were mixed, though there were several reoccurring negative comments, those being: two hands were required to fire the first shot, the pistols were muzzle heavy, and the officers felt that they were inherently more dangerous than revolvers. In May of 1909, 126 Model 1900 pistols (a mix of first and second contract) were turned in at Rock Island Arsenal for inspection. On 18 June 1909 the Commanding Officer of Rock Island Arsenal was approved to sell the pistols, with the price being set at $7.50 for a pistol, magazine, and holster. Of these 100 first contract pistols, only 30 known surviving examples, including this one, are listed on p. 28 of the previously mentioned reference, making this an exceptionally scarce U.S. military automatic. This example is marked with the correct two-line, two-block "Browning's patent" and Colt address followed by the circled Rampant Colt on the left of the slide, while the right has the standard two-line caliber marking. Both sides of the slide feature later style plunge mill serrations at the rear. The left side of the frame is marked with the serial number "94" and the trigger guard bow is marked "U.S." It is fitted with a blade front sight and a factory replaced round top notch rear sight in place of the original "sight safety", spur hammer with arched bottom checkering, a pair of smooth walnut grips with a very faint partial cartouche on the left, and it is furnished with a full nickel magazine with base marked "PAT'D SEPT.9.1884" Provenance: The Gus Cargile Collection

Very fine as factory converted from sight safety configuration, retains 75% plus of the bright factory refinished high polish blue finish, 60% case colors on the hammer, and 70% of the nitre blue on the trigger and screw heads. The grips are fine with some moderate chipping and a full length crack on the right panel, and otherwise minor dings, scratches, and wear. Mechanically excellent. 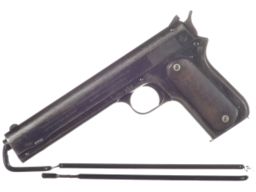 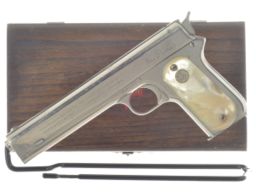 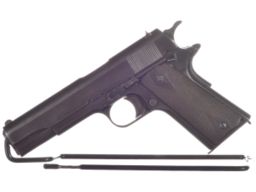 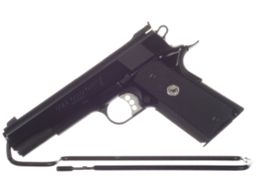 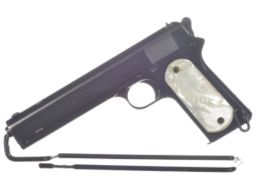 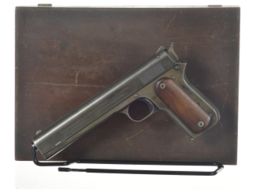